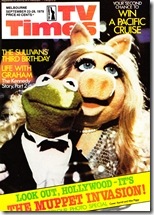 The Sullivans prepare for peace
As the Nine Network’s The Sullivans moves into its fourth year of production, fans needn’t worry that the end of World War II will mean the end of the show.  “Yes, The Sullivans definitely will go on after the war,” says Crawford Productions chairman Hector Crawford.  “It is a reflection of Australia of that period.  The war has been a vital part of it to date, but the stormy period after will be just as interesting a background when the time comes.  The years just after the war were stormy ones for the economy, politics and everyday life of the country.”  But when asked whether Grace Sullivan (Lorraine Bayly) will return to the series, Crawford could say only that “options remain open.”  Bayly has been travelling overseas for several months but her future plans remain a mystery, even for the cast of the show.  As the show passes its third birthday, two of the key characters from the recent spin-off telemovie Jovan: The John Sullivan Story will be joining the series, secret service agent Captain Meg Fulton (Olivia Hamnett) and John Sullivan’s lover Nadia (Vera Plevnik).

Top film role to Sullivans regular
Sydney actor David Cameron has won a key role in the upcoming 0-10 Network mini-series Water Under The Bridge.  The 27-year-old, who graduated from NIDA in 1968, has appeared in Bellbird, Certain Women, Dynasty, Against The Wind, The Truckies and Power Without Glory.  Cameron’s most recent role has been as Russell Hardwicke in The Sullivans.  In Water Under The Bridge, Cameron plays Neil Atkins, an aspiring actor in love with a newspaper columnist.  Cameron’s appointment to Water Under The Bridge follows the recent announcement that Robyn Nevin will play the lead female role of Shasta. 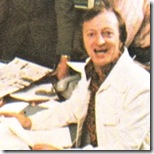 Graham Kennedy: The man and the myth – Part Two
More has been written (true and false) about Graham Kennedy (pictured) than any other Australian celebrity, including sports stars and prime ministers.  So what is the truth about some of the Kennedy myths and idiosyncrasies?  MYTH:  He was jealous of other IMT hosts.  Fact:  There are stories to the contrary.  When Father Michael King guest hosted IMT in 1969, he received a telegram from Kennedy:  “Be good but we don’t want any miracles.”  Then when he retired from IMT he personally recommended Ugly Dave Gray as his successor.  MYTH: Kennedy is disinterested in his huge collection of awards and uses them as door stops.  Fact:  He’s said this as a gag.  He keeps every award he has ever won on a silver tray.  MYTH: Kennedy doesn’t like and doesn’t relate to children.  Fact: He’s been a godfather six times, including to the daughter of his friend and manager, Harry M Miller and also to the daughter of former colleague Joy Westmore.  He also sponsored a Vietnamese war orphan through World Vision.  MYTH: Kennedy is colour blind and cannot tell red from green.  Fact: Kennedy said, “it’s true I do have trouble telling the difference between some greys, greens, blues.  I have to watched about the clothes I wear, or I might turn up in a red shirt with a green jacket which I think is blue.”  MYTH: His nickname is Gra-Gra.  Fact:  It’s Gay-Gay, which dates from when Kennedy was about 11 when a neighbour’s small daughter couldn’t say the word Graham.  “My aunt Nancy still calls me Gay-Gay when she calls,” Kennedy said.  Among Kennedy’s idiosyncrasies:  He is a night person that rarely goes to bed before midnight and has been known to leave messages on Harry M Miller’s phone at 2.30am;  During the IMT era everyone on the show noticed he never worked quite as well on the nights he wore a white suit – he became less extroverted; He’s nervous about every performance, whether it’s his own show or guest appearances;  He has a phenomenal memory.  He can recall a tag of a sketch he did 15 years ago and even whether or not someone fluffed up a line.  Producer Peter Faiman recalls that Kennedy will accept that problems will come up and be rectified.  But if that same mistake is made 12 years later, he’ll remind you that you made that same error 12 years before; Kennedy has a fear of crowds and had declined many offers to be the King of Melbourne’s Moomba festival, but finally relented in the year of the Queen’s Silver Jubilee year.  As to commentary on his private life and relationships with women, Kennedy said in a 1976 interview, “I lead a fairly private life.  It’s my business what I do or don’t do when I close my bedroom door.”  Although he did once admit that he’d seriously considered marriage twice in his life, and there was his engagement to singer Lana Cantrell.

Why Tina’s head is in the clouds
Despite working as an actress on TV, stage and film for over ten years, Tina Bursill still finds that people can’t recall her name when they meet her:  “Then I have to patiently explain that I am not Tina Grenville nor a relative of film-maker Tim Burstall.”  The confusion was not helped when Bursill was cast alongside Grenville in the short-lived series The People Next Door, the sequel to The Godfathers.  The 28-year-old actress hopes that the public will have an easier time of recognising her now that she is starring in the new Seven Network series Skyways as ambitious assistant airport manager Louise Carter. “She is developing nicely now, and I hope the public like her as much as I do.” 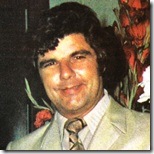 Briefly…
Garry Meadows (pictured) was disappointed when his children’s TV show, Meet The Giants, was refused a C classification.  But now the Family Feud producer is re-submitting the show for approval following some modifications to the format.  The pilot, produced earlier this year for the Reg Grundy Organisation, features four schoolchildren aged between 10 and 14 in a panel interview with Prime Minister Malcolm Fraser.

Foreign Affairs Minister Andrew Peacock will be one of the presenters at this year’s Sammy awards presentation to be held on 17 October.  The awards, a joint venture between the Seven Network, TV Times and the Variety Club of Australia, will be hosted by Roger Climpson.

Former ABC newsreader Margaret Throsby, who resigned from the broadcaster to have a baby, is returning on a part-time basis.  Throsby’s first appearance following her comeback is co-hosting the presentation of the Prince Philip Prize for Australian Design to be held in Perth.

Viewpoint: Letters to the Editor:
”Congratulations to the Nine Network for showing The John Sullivan Story.  I’m sure a lot of families who don’t watch The Sullivans enjoyed this movie, which was a pleasant change to the usually violent Sunday night movies.”  M. Lewis, NSW. 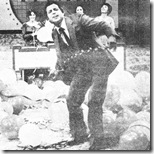 “Tony Barber (Family Feud, pictured) never fails to irritate me with his idiotic antics and endless drivel, but he really disgusted me when he remarked to a contestant that she was in quite an advanced stage of pregnancy.  It was true, but only a very arrogant man would have deliberately drawn attention to the fact.”  N. Wilson, NSW.

“Why, in an area like the goldfields of Kalgoorlie with its early workers, does VEW8 have Poldark on so late at night – 9.45pm, sometimes later?  Surely it could be put on earlier.”  J. Ware, WA.

What’s On (September 22-28):
On Sunday afternoon, ABC presents the Grand Final of the NSW Rugby League, live from the Sydney Cricket Ground.

This Fabulous Century (HSV7, Sunday) looks at the history of running in Australia, from the Stawell Gift to Sydney’s City to Surf run.

On Monday night Peter Landy hosts HSV7’s telecast of The Brownlow Medal for 1979, live from the Southern Cross Ballroom in Melbourne.  Then on Wednesday night, HSV7 presents Sensational Seventies, a tribute to the decade in VFL including players Ted Whitten, Kevin Murray, Darryl Baldock and the emergence of Michael Roach, Kevin Templeton and Paul Van Der Haar.

The final lead-up to HSV7’s coverage of the VFL Grand Final starts on Friday afternoon with the lunchtime Football Procession through Bourke Street in Melbourne’s CBD, featuring the teams that will be playing in the Grand Final.  Then on Friday night, HSV7’s coverage of the The Commodore Cup Grand Final, live from the St Kilda Football Ground.  Leading the coverage are Peter Landy, Lou Richards, Bob Skilton, Doug Wade and Jack Elliott.  Then after a late news bulletin, HSV7 enters another all-night Football Marathon, with Stephen Phillips presenting highlights of past Grand Finals and interviews with team coaches and football personalities.

Also on Friday night, GTV9 presents the Australian Film Industry Awards, live from the Hoyts Entertainment Centre, Sydney.  Nominations for Best Film are Cathy’s Child, In Search Of Anna, Mad Max and My Brilliant Career.  And on the same night, ABC has the Prince Philip Prize For Australian Design, hosted by Stuart Wagstaff and Margaret Throsby in a direct telecast from the Sheraton Hotel, Perth.