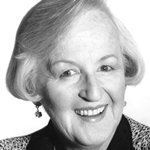 Actress Joy Westmore, best known as Officer Barry in Prisoner, has died at the age of 88.

Born Joy Grisold, she was a winner on an early radio talent quest and began reading commercials on Melbourne radio station 3UZ while also working in the office at the station.

She went on to the theatre, including performing in revues with Barry Humphries and joining the Melbourne Theatre Company. This led to appearing on sketches on In Melbourne Tonight, hosted by Graham Kennedy, who knew her from 3UZ.

She married a dentist, Brian Westmore, in 1960 and they lived in London for six years before returning to Australia with a young family.

She also scored an unusual claim to fame, featured on the front page of The Age newspaper in 1969 being interviewed from the first household in Victoria to switch over to using natural gas.

“I suppose at the time they were looking for any house that was new in (the Melbourne suburb) Carrum. The natural gas came from a Dandenong centre and we were just close to the outlet,” she told The Age, still at the same house in Carrum, in 2009. “I had a young family and a new house and I suppose they thought I could string two words together.” Westmore made a return to performing in the 1970s on The Graham Kennedy Show and The Ernie Sigley Show and ABC‘s production of The Sentimental Bloke.

By the late 1970s, she secured the guest role of Officer Joyce Barry in the popular series Prisoner. The role eventually became a regular character and stayed with the series to the final episode in 1986. Joy Westmore being made up for The Graham Kennedy Show

She later appeared in the early 1990s mystery series Cluedo and played a couple of guest roles in Neighbours.

Other TV credits included Bellbird, The Sullivans, The Damnation Of Harvey McHugh, Fergus McPhail, Blue Heelers and It’s A Date.

Permanent link to this article: https://televisionau.com/2020/11/obituary-joy-westmore.html