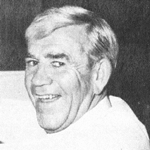 Born in Collingwood, Richards’ joining the Collingwood Football Club followed that of his grandfather, Charlie H Pannam, and two uncles.

He played 250 games for Collingwood and captained the team to a premiership in 1953.

With his thorough knowledge of the game and a cheeky wit, he became a popular commentator for the game — one of the first footballers to really gain a high profile in the media. He wrote newspaper columns for over 20 years, earning the nickname ‘Louie the Lip’, and commentated on radio 3XY and then 3DB. When TV began in Melbourne, Richards joined HSV7 and stayed for almost 30 years.

As well as a commentator of VFL matches, he was part of the regular team on the long-running World Of Sport, which ran every weekend for 27 years. He was also one of the three panellists, alongside Jack Dyer and Bob Davis, on the VFL preview League Teams that developed a cult following late on Thursday nights.

After Seven lost the rights to the VFL (now AFL) in 1987, Richards joined GTV9 as a presenter on National Nine News, Wide World Of Sports and later on The Footy Show.

He retired from television in 2008 but continued to make guest appearances on The Footy Show. The show’s handball competition and prize was named in his honour.

Permanent link to this article: https://televisionau.com/2017/05/obituary-lou-richards.html