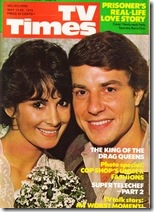 Wedding bells for Prisoner stars
TV’s love story of the year culminated in a wedding on Sunday 29 April – and there wasn’t a TV camera in sight.  Prisoner stars Barry Quin and Peita Toppano (pictured) got married in a garden wedding at the property of Toppano’s parents (Enzo and Peggy Toppano) in Pymble, NSW.  The bridesmaid at the ceremony was Prisoner co-star Carol Burns and the best man was The Young Doctors star John Dommett.  The newlywed couple had a week’s break from production to honeymoon on the NSW coast.

Bill looks at a peach of a city!
Bill Peach’s new ABC series, Peach’s Cities, is half-way through production.  In the series, Peach explores each of Australia’s eight capital cities.  The first four episodes have already been filmed.  The new series takes a similar format to Peach’s previous series, Peach’s Australia, though will put less emphasis on the historical background and more on the cities’ future and what problems they may face.  Peach’s Cities is expected to air on ABC later in 1979 and will be followed by a book. 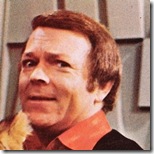 My worst moment…
Being a TV interviewer can bring many challenges, whether talking to Mr and Mrs Average or the rich and famous, and sometimes things don’t always go to plan.  Countdown’s Ian ‘Molly’ Meldrum recalled an interview with US singer Billy Joel: “I started by asking him a very involved question that took about 75 seconds to ask.  Then I found Billy was in one of those quiet moods.  All he said was ‘yes’.  So I asked Billy if he had anything else to say on the subject and he said ‘no’.  So I did all I could do and asked him long questions to which he gave his short answers.  It was a nightmare.”  Mike Walsh (pictured) didn’t recall his worst but, rather, his most embarrassing interview, featuring magazine columnist, veterinarian Dr Paul: “He came on the show to tell us how to tell the sex of a rabbit.  A local Catholic school and a Church of England school donated rabbits.  The rabbits soon made it clear which sex was which when, undeterred by their public appearance, they got on with the business.  I poured a glass of water over them but they just kept at it.”  TVW7 Today hostess Stephanie Quinlan never forget the day Warren Mitchell walked out on an interview: “Mitchell came for the interview when rebuilding work was going on at the studio.  The sounds of the work were clearly heard and Mitchell walked off the set at least three times.  He eventually agreed to the interview and so, with a prayer for quiet builders, I started the questions.  By that time, Mitchell’s mood was similar to a large black thundercloud so his answers were somewhat loud and rude.  I was surprised that such an educated man could vent his feelings so uncontrollably and show such a lack of professionalism.  I must say he didn’t act like a gentleman.”

Briefly…
The Grundy Organisation is making a pilot for a “topical light entertainment” show for the 7.00pm timeslot for the 0-10 Network.  The project, titled Graffiti, will feature a large cast from both Sydney and Melbourne.

British sex symbol of the ‘50s, Diana Dors, is coming to Australia to promote her book Behind Closed Dors and will be making guest appearances on both The Mike Walsh Show and The Don Lane Show.

Viewpoint: Letters to the Editor:
”I congratulate the staff of ATN7 and TEN10 Sydney who do such a wonderful job of program planning.  It was a stroke of genius to put The Muppet Show and Hans Christian Andersen on at the same time as the Star Wars Holiday Spectacular.  I hope these individuals of such superior intellect could inform a mother, with only one TV set, how she can explain to her two disappointed children that they could watch only one program.  I hope both Channels 7 and 10 take satisfaction in the fact that they upset a lot of children.” B. Hawk, NSW.  (TV Times responds: “All commercial TV channels are in competition to gain the biggest audiences, and “counter-programming” to reduce the anticipated ratings of an opposition channel’s programming is part of their business.  We get many letters on the subject.”)

“I’d like to take a shot at The Young Doctors – how the nurses carry on with the young doctors!  One would think that just about every nurse would have her going-on with the doctors.  The nurses on TV soapies are an insult to the honourable nursing profession.” I. Craig, NSW.

“Australian comedies are never usually worth watching, so I was pleasantly surprised to see that Doctors Down Under is not only distinctly worth watching, but it is nearly as good as the original.”  D. Dowell, NSW.

What’s On (May 19-25):
Philip Adams, Harry Butler and Lloyd Rees are the guests on the final Parkinson In Australia (ABC, Saturday).

This Fabulous Century (HSV7, Sunday) looks at fads and fashion – remembering the pogo-stick, mini-golf and yoyo crazes and the many changes in women’s fashions.

ABC presents the first of a six-part series, Journey Into Japan, narrated by Keith Adams.  The program looks at various aspects of Japanese life including leisure, tourism, culture and tradition.