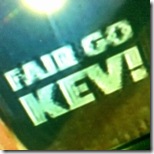 Community TV continues its plea to the Government to allow it a defined migration path to digital transmission. Melbourne’s C31 has stepped up its campaign for digital with a new slogan – ‘Fair Go, Kev!’.

The slogan (pictured) is now broadcast around the clock as a watermark in place of the station’s logo across all programming. It is a simple plea to prime minister Kevin Rudd following the recent budget announcement that, once again, denied the Community TV sector an invitation to move to digital TV – while ABC and SBS both received boosting to their finances to fund their digital initiatives and $140 million was set aside to assist regional communities in moving to digital TV. But nothing has been promised for digital TV other than an earlier vague statement from communications minister Senator Stephen Conroy that Community TV ‘would not be left behind.’

Curiously, the Budget has made financial commitments to fund and support the community radio sector’s transition to digital which is still barely in the start-up stage with only a few capital cities currently receiving digital radio. Digital TV, on the other hand, is now into its ninth year in the major capital cities and reaching a point where almost half of all households in these cities have converted to digital and, possibly, many have lost access to their local community TV channel which is stuck on analogue.

In a press release, published on their website just after the announcement of the Federal Budget, station manager Greg Rees argues that Community TV provides invaluable diversity of content, industry training and marketing and that there is sufficient spectrum available right now to allow them immediate access to digital transmission – and that C31 is essentially ready to go to digital: “the cost associated with upgrading our facilities to broadcast in digital are, relatively speaking, miniscule.”

In a recent article published on Crikey, Rees estimated that only $2 million would be needed to convert C31 to digital transmission with an ongoing annual cost of $120,000 to simulcast with analogue. This compares to the sum of around $250 million that the Government is allowing in concessions to regional commercial broadcasters. The Government has also allowed free access to all commercial and national broadcasters to digital broadcast frequencies and unlimited simulcast with analogue in the lead-up to the phased shutdown of analogue services.

Permanent link to this article: https://televisionau.com/2009/05/c31-steps-up-digital-plea.html