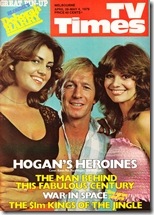 Hogan’s Heroines
Delvene Delaney’s absence from The Paul Hogan Show this year has led to a lucky break for two female beauties from vastly different backgrounds. Karen Pini, from Western Australia, rose to fame as a runner-up in the Miss World contest of 1976 and later appeared as a nude centrefold in the first edition of Australian Playboy magazine.  Pini is now pursuing an acting career with The Paul Hogan Show as well as a role in The Young Doctors. Sue McIntosh had worked in television in the United Kingdom, as an actress and presenter, before coming to Australia where (as Sue Donovan) she became best known as the host of ABC’s Adventure Island as well as appearances in The Graham Kennedy Show, The Don Lane Show and The Mike Walsh Show, as well as hosting GTV9’s You Me And Education.

Quest winner to study in US
Marilyn Meier, the 14-year-old viewers’ choice in ABC’s Quest ‘78 talent series, has decided to follow her dream and study in the US. The young performer is to study with four or five months tuition with Bela Siki, Professor of Music at the University of Washington. Ms Meier will also attend a six-week summer school at the Banff School of Fine Arts in Canada after winning a $1000 scholarship to the school. 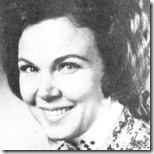 Tanya’s back to bridge the gap
Tanya Halesworth (pictured), one of ABC’s first female TV presenters in the ‘50s and later host of the Nine Network’s all-female current affairs program No Man’s Land, is returning to the national broadcaster to host Sunday Spectrum, a two-and-a-half hour arts and entertainment program featuring documentaries, concerts and local material. The first edition of Sunday Spectrum will also include an interview with ACTU president Bob Hawke, who will be the first in a series of interviews with well-known Australians to discuss the books that have had the most influence on their lives.  Sunday Spectrum starts on ABC in mid-May.

Dr Susan’s prescription for living
Judy Lynne, Dr Susan Richards in The Young Doctors, is making a 30-minute pilot for what she hopes will be picked up for a 26-episode series. The new program, Live Life, looks at various leisure activities and to inspire people to make more active use of their spare time. The pilot, which is being made with the support of the Nine Network, is the result of twelve months’ research and planning. The network is to decide in May if the pilot will be expanded into a series.

Briefly…
Olga Davis, one of the hosts of ATV0’s Grecian Scene, has just returned from Greece where she was gathering material and interviewing Greek performers. The program, which screens every Saturday on ATV0, is also shown in Greece and in some Arab countries.

Actor Terry Donovan, who has been touring Australia to promote the movie The Money Makers, has signed up to replace George Mallaby in Cop Shop. Donovan will start work on the series later in the year. 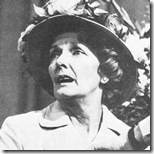 Even though Number 96 ended production over a year ago, Pat McDonald is still finding it hard to shake off the Dorrie Evans (pictured) persona she portrayed for over five years: “I did realise at the time that it would take a long time for people to forget her completely, but I didn’t think she would still be alive in people’s minds to the extent that she is today. I’m constantly amazed by it. I have a feeling I will have to play a few very dramatic, completely different roles on TV before people will let me move on.”

Viewpoint: Letters to the Editor:
”I’m glad The Goodies are back on ABC.  It’s a really good show; the three stars are brilliant comedians and writers, the show is always hilarious and it’s on at a reasonable time.” S. Carrington, NSW.

“In episode four of Anna Karenina on ABC, Count Vronsky’s horse fell at the last jump of a steeplechase.  Was the mare he was riding really destroyed?”  A. Moores, NSW.  (Editor’s reply: “nyet”)

“I and many others think Doctor Who is about as thrilling as the tenth rerun of Days Of Our Lives.  This is typical of British shows, especially on ABC.” D. Johns, QLD.

What’s On (April 28-May 4):
Weekend sport includes the finals of the World Tournament Hockey, live from Perth, and the 1979 Australian Sports Sedans, from Sydney’s Oran Park, live on ABC. ABC and HSV7 have Saturday night replays of highlights from the day’s VFL matches.  On Sunday afternoon, Melbourne and Richmond clash in the Commodore Cup, live from Moorabbin, on HSV7. 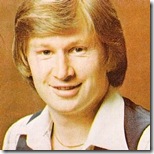 The first batch of multicultural programs compiled by the Special Broadcasting Service (SBS) are shown on ABC over three hours on Sunday morning.

In this week’s Marque: 100 Years Of Motoring (ABC, Thursday), Peter Wherrett looks at the Mini and the front-engine, front-wheel-drive cars that it has since inspired.  Then he compares GM’s Corvair with the early Volkswagens.

HSV7 launches a new weekly children’s show, Stax, promising a new approach to television where children, aged 7 to 13, provide the ideas for the show and present them.  The program is produced for HSV7 by Bob Weis and new company Open Channel.