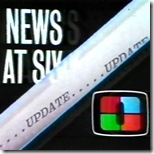 Network Ten have, for many years, stretched the boundaries of news presentation in this country.  They were the first network with a one-hour evening news in the ‘70s.  They adopted the American style of heavily-populated news desks and casual interaction between presenters.  They tried, albeit briefly, to have a three-newsreader format in Sydney and Melbourne.  They were the first network to break the 6.00pm news barrier – with NEW10 in Perth in 1988, and then the whole network going ‘first at five’ in 1992.

And, today, there are reports that Ten is considering expanding its one-hour 5.00pm news bulletin to 90 minutes, putting it up against Seven News and Nine News.  If the move goes ahead, is the first time since 1991 that all three networks will have news at 6.00pm.

The move is, apparently, to save the network millions of dollars it is paying each year for trotting out re-runs of The Simpsons at 6.00pm, by utilising resources it is already paying for.   And given that Ten usually wins the 5.00pm hour in the ratings – despite the high-profile game show contest being fought between Seven and Nine at 5.30pm – it is hoped that this audience will flow over to 6.00pm and may also increase the profile of Neighbours, which struggles at 6.30pm.

Since the report appeared in this morning’s press, Network Ten has since denied the suggestion that it is going through with this change to its news format, although they have conceded that pilot bulletins in the expanded format were trialled.

The issue raises the question, though, do we need three versions of news at 6.00pm?  In a market where we only have three commercial channels, would it not be better to offer an alternative to the two networks already offering news at that time?  On the other hand, Ten has tried to offer alternatives at 6.00pm for many years now – Hinch, Studs, Jeopardy!, Level 23, Echo Point, Battle Of The Sexes, and many, many re-runs of The Simpsons, just to name a few – and none have really clocked up decent ratings.

There is no denying that Ten needs to do something with its 6.00pm timeslot, but is more news the answer?

Permanent link to this article: https://televisionau.com/2009/04/more-news-is-good-news.html