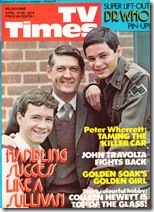 Handling success like a Sullivan
TV Times talked to The Sullivans stars Richard Morgan and Jamie Higgins (pictured, with co-star Paul Cronin) about their roles and success in one of Australia’s most popular TV dramas.  “I’m amazed at how many people cannot tell me from my character.  So many of them want to talk to Terry.  Off camera I’m not Terry,” Morgan told TV Times.  Born in Tasmania, Morgan was studying to be a schoolteacher when he auditioned for the role in The Sullivans:  “I thought it would run for 13 weeks and that would be it and I would go back to teaching.  But the show went on and I’m still here.”  For Jamie Higgins, playing someone considerably younger than himself, there is frustration that he tends to be regarded as a child.  Reporters tend to ask him kid-style questions and fans tend to believe that he is really only 14 years old.  But, for the former New Zealander with experience in amateur theatre and professional roles in two telemovies, starring in the top-rating series brought some tough lessons:  “When I arrived I thought I had done so much and that I was pretty good at it but it didn’t take me long with some of the experienced actors in the series to find out that really I had done very little.”

Julie Anthony and US stars team up for the kids
Singer Julie Anthony will join US stars including Helen Reddy, Bob Hope, Diahann Carroll, Peggy Lee and Miss Piggy in a TV special being produced for the International Year of the Child.  The program, I Am A Child, will include segments recorded in Australia, the US and Europe. 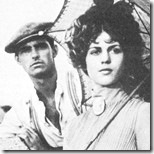 They’re off!
Some of Australia’s most familiar TV faces will appear in Born To Run, the second Walt Disney production to be made in Australia in three years.  The movie, set in the Hunter Valley in 1911, includes John Meillon, Julieanne Newbould, Andrew McFarlane and Mary Ward. 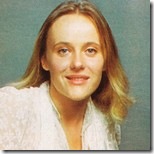 Elizabeth’s golden opportunity
Feeling typecast as a “period” actress after her roles in Seven Little Australians,  Ben Hall and the movie The Chant Of Jimmie Blacksmith, actress Elizabeth Alexander (pictured) was looking forward to her role in ABC’s new series Golden Soak and the chance to wear jeans and shirts for her role as outback girl Janet Garrety.  But now that production has finished it is back to period costume with a contract to appear in four plays for the Melbourne Theatre Company – and they’re all period pieces.

Briefly…
With Rowena Wallace and George Mallaby leaving the popular Seven Network series Cop Shop, their on-screen daughter, played by Jo-Anne Moore, is also to be written out.  The 20-year-old is hopeful of some stage work or other TV roles.

ABC’s rural affairs program Countrywide is to discuss the future of Australia’s railway network following predictions that the system will report a $1 billion loss in three years time.

There’s a surprising new recruit on Adelaide NWS9’s Sunday football show.  Model Francine Shearman, with a husband and son both involved in Aussie Rules, intends on shattering the myth that women should be seen and not heard when it comes to football analysis.

Viewpoint: Letters to the Editor
”Why is it that a program such as Match Of The Day on ABC has to suffer from the ratings game, which is such an obvious game to the commercial channels?  This program is so tremendously popular with tens of thousands of fans, but is now placed in a timeslot which makes it very difficult for younger fans to see it.  It started off at the reasonable time of 9.10pm but has been gradually put back to the present timeslot of 10.20pm.”  J. Zeeman, NSW.

“”I’ve just seen Robin Williams on Mork And Mindy.  All you Mork fans out there might like to know that BBC’s original Goons made exactly the same noises 25 years ago.” T. Robinson, VIC.

What’s On (April 14-20):
Saturday afternoon sport includes 3 hours coverage of the heats of the Stawell Gift on ABC, leading up to the final race on Monday afternoon.

HSV7 presents a direct telecast of the Easter Sunrise service at 7am Sunday morning.

Sunday afternoon football fans have the choice of The Commodore Cup on HSV7, live from South Melbourne, and VFA on ATV0.

ABC’s Holiday takes a look at the current popular destination for Australian tourists – the West Coast of America.

There must be an election looming – the Liberal Party has its half-hour policy speech telecast on Tuesday night simultaneously on ABC, HSV7, GTV9 and ATV0.  The Labor Party has its turn on Thursday night.