Angel’s saviour
Home And Away‘s recently-widowed Angel (Melissa George) is set to be swept off her feet by Simon Broadhurst (Julian Garner) in a storyline that is to mark George’s departure from the series. “Simon’s a rich businessman who develops (computer) software. He’s kind of the Bill Gates of England,” Garner tells TV Week of his character. “I think Simon’s definitely interested in getting together with Angel. He really is taken by her. He really cares about her a lot, in fact. A lot of people in Summer Bay like Simon and think he would be good for Angel in helping her to move on and be happy.” 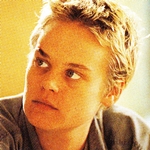 A new twist to Bryan’s career
Actor Bryan Brown — also a member of the TV Week Logie Awards Hall of Fame — has taken on a new role to promote new talent with his new series Twisted Tales. With the idea of producing a series of twelve half-hour dramas, Brown placed a newspaper advertisement requesting scripts for the project. He ended up receiving more than 1200 entries which was culled to 12. Most of the successful script submissions came from writers who have never had a work go to production before. TV Week was invited to view the filming of The Crossing, one of the episodes of the upcoming series. The Crossing, starring Justine Clarke and Nadine Garner, tells the story of dramatic changes to a woman’s life after a serious car accident. “This is draining,” Garner (pictured) told TV Week. “There is actually quite a lot of pressure to this shoot. We have such limited time, and that is difficult when you are having to capture such high drama.” Garner was also full of praise for Brown in establishing the series. “It’s a very generous thing to do — giving back to the industry and giving new talent a go.” Twisted Tales goes to air on Nine later in the year. 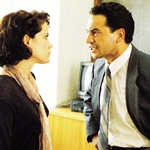 Whipping up controversy
In preparing for her role in the upcoming telemovie Whipping Boy, actress Sigrid Thornton sat in on sessions of the NSW Royal Commission into police corruption. In Whipping Boy, based on the novel by Gabrielle Lord, she plays single mother and lawyer Cass Meredith, the state-appointed head of an inquiry into a child pornography racket. The Network Ten telemovie also stars Temuera Morrison (pictured with Thornton) as John Carrigan, a former vice squad detective suspected of corruption whose appointment to the task force cause conflict.

Program Highlights (Melbourne, June 22-28):
Saturday: Beyond 2000 (3.30pm, Ten) reports on tyres what won’t go flat; and unlocking the secrets of Alzheimer’s disease. In Sweat (5.30pm, Ten), Tom (Martin Henderson) is on a downward slide and turns to steroids. In Bush Tucker Man: Stories Of Survival (6.30pm, ABC), Les Hiddins traces the journey of ill-fated explorers Burke and Wills who may have fared better if they had known more about the preparation of bush tucker. Saturday Night Football (8.30pm, Seven) features Brisbane Bears versus Melbourne, live from Brisbane, with Sandy Roberts and commentators Malcolm Blight and Don Scott. 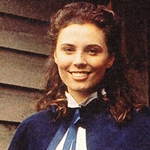 Sunday: AFL Today (1pm, Seven) features Sydney Swans versus Footscray, live from Sydney, followed by West Coast Eagles versus St Kilda, live from Perth. In Banjo Paterson’s The Man From Snowy River (6.30pm, Nine), Danni (Kristie Raymond, pictured) falls in love with a charming young man, known only as Tuck (Christopher Gabardi), who arrives at Langara. Sunday night movies are Something Is Out There (repeat, Nine) and Death Becomes Her (Ten), up against the debut of two-part mini-series Murderous Passion (Seven). 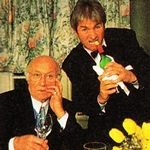 Tuesday: In Neighbours (6.30pm, Ten), Danni (Eliza Szonert) climbs the fashion ladder after hearing from a rock star who sees her dress in the local newspaper. In Better Homes And Gardens (7.30pm, Seven), Bernard King (pictured with co-host John Jarratt) makes a guest appearance to offer tips on preparing for a dinner party. British comedy duo Gareth Hale and Norman Pace star in a one-hour special, Hale And Pace Down Under (8.30pm, Nine). In Blue Heelers (8.30pm, Seven), Tom (John Wood) is faced with a dilemma when the attempted suicide of Clancy’s (Michael Isaacs) mother places the future of her intellectually disabled son in jeopardy.

Wednesday: In Home And Away (7pm, Seven), Keith (Scott McGregor) goes to Fisher’s (Norman Coburn) office with a gun, determined to get what he wants. Steve Robilliard and Anne Sargeant host coverage of Australia versus New Zealand at the Netball International Test (8.30pm, ABC) in Adelaide.

Friday: In Home And Away (7pm, Seven), Chloe (Kristy Wright) is attacked on her way home from a party. Rex Hunt and Steve Starling host the special, Rex Hunt Fishing Adventures In Vanuatu (8.30pm, Seven).