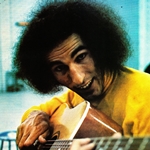 Rory O’Donoghue, actor, musician, composer and performer best known from sketch comedy series The Aunty Jack Show, has died at the age of 68.

Born in London, he came with his family to Australia at the age of seven. Before coming to Australia, his parents were both performers with the D’Oyly Carte Opera Company.

O’Donoghue made his performing debut at the age of 13 in the stage musical Oliver!, followed by The Sound Of Music. He formed an early partnership with Grahame Bond, working together in comedy revues and later making television commercials — with clients including banks, publishers and oil companies.  They then created the pilot for Aunty Jack as part of ABC‘s The Comedy Game, with Bond as Aunty Jack and O’Donoghue as Thin Arthur.

The Aunty Jack Show debuted as a series in November 1972 and only went for two seasons but its legacy lasted far longer, with the show creating the character Norman Gunston (Garry McDonald) and its cast appearing in a one-off skit to signal the launch of colour television for ABC in 1975.

O’Donoghue continued to work as a musician and composer and later television credits included Wollongong The Brave, The Of Show and children’s game show Razzle Dazzle.