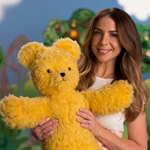 Hosted by Nova FM‘s Kate Ritchie, the program features rare footage from the Play School archive — including scenes from the very first episode that went to air on Monday, 18 July 1966, plus some of the show’s earliest presenters. The special revisits some of the feedback that the show had received over the years, including the outrage from the media when one segment featured a family of two mothers.

Although Play School was produced for many years ‘as live’ — meaning that it all had to be done in one take — some bloopers inevitably had to be cut. Viewers will get to see a few such moments… which perhaps should carry a warning of containing obscene language! There are some words we just never imagined Benita blurting out on camera! 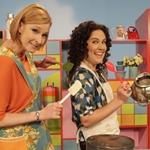 ABC is also commemorating Play School‘s 50th anniversary with a series of short segments featuring a mix of Play School presenters and some other familiar faces giving their own take on some Play School songs and stories. Guy Sebastian, Magda Szubanski, Molly Meldrum, Hamish and Andy, Leigh Sales, Annabel Crabb, Lee Lin Chin, Carrie Bickmore, Dami Im, Delta Goodrem and Kate Ceberano are just some of the names to appear in the segments that have been airing during the month on ABC Kids and on ABC iView. 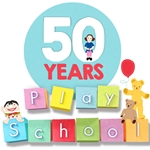 Since its debut in 1966, Play School has clocked up around 2250 episodes and amassed a library of almost 2000 songs. Six versions of the opening titles have appeared over 50 years. The show was awarded a TV Week Logie in 1998 for Most Outstanding Achievement In Children’s Television and was inducted into the TV Week Logie Awards Hall of Fame in 2006.

The program has been a commercial success for ABC through product merchandising, concerts and recorded media and led to spin off titles Bananas In Pyjamas and Little Ted’s Big Adventure. Permanent link to this article: https://televisionau.com/2016/07/looking-back-at-50-years-of-play-school.html