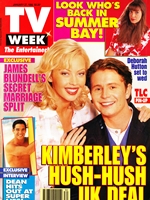 Kimberley’s hush-hush UK deal
Former Neighbours star Kimberley Davies has been playing to packed houses in the UK in the pantomime Goldilocks And The Three Bears. And when panto season is over, Davies is expected to stay in the UK to work on a top secret TV project. “I’ve got something else here (in England) that I’m not really allowed to talk about because it’s not definite yet,” she told TV Week. “I’m going to stay here for a little while then I’m coming back to Australia for a couple of things.” But although she’s remaining in the UK for the time being, Australian viewers will see her back on screens shortly in a new series of Just Kidding. Davies has replaced former co-host Sofie Formica which she says is part of her plan to diversify her career. “I think it’s good to do lots of different things,” she said. “That’s the reason I’m doing panto — doing live theatre is a different experience.” Davies has also not ruled out doing another series of Just Kidding should it continue to rate well. “Steve Jacobs (pictured with Davies) is so great to work with. He’s just hilarious.” 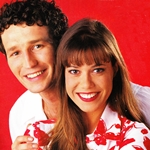 Summer Bay’s bad girl is back!
Gladiators co-host Kimberley Joseph is set to make a return visit to Seven‘s Home And Away, reprising the role of Angel’s (Melissa George) bitchy old school-chum, Joanne. This time around, Joanne is suspected of selling drugs to local school children and there is romance on the horizon with school teacher Steven (Adam Willits, pictured with Joseph). “She gets her just desserts, but, who knows — there is every possibility she could be back,” Joseph told TV Week. As well as Home And Away, Joseph’s profile in the UK has been boosted by her hosting of the international series of Gladiators and she is about to star in a stage production of Only When I Laugh, co-starring with Keeping Up Appearances actor Geoffrey Hughes. 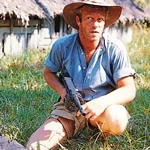 “Country towns, war zones, tough suburban schools, the Gold Rush era, and the navy have all been locations for Australian dramas, but they all had one thing in common — their popularity. Like their cousins, the soaps, Australian dramas feature a mix of storylines, characters, and social issues. Where they differ is in their conclusion — the threads of the stories are tied up in a nice little package at the end of an episode, while in a soap the saga goes on. From there the line blurs, with quality soaps like A Country Practice (1981-94) focusing on the lives of the people of Wandin Valley, medical conditions and social issues. Guest actors were also gainfully employed in the Seven Network‘s Rafferty’s Rules (1987-90), where a pre-Blue Heelers John Wood took the role of a tough but fair stipendiary magistrate. Catherine Wilkin, who played public prosecutor Pauline Grey in Rafferty’s Rules, went on to star in Embassy (1990-92), which had the distinction of being the first Grundy series sold to the ABC. Set in the fictitious south-east Asian country of Ragaan, the show revolved around the lives of the staff of the Australian embassy. Everybody remembers The Sullivans (1976-82) brought our grandparents’ sepia-toned memories of “The War” to our screens in living colour. And before The Sullivans came Spyforce (1971), featuring Jack Thompson (pictured), and later Nick Tate, as an Aussie commando battling the Japanese in World War II.” 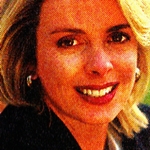 Monday: The 30th NFL Superbowl (10am, ABC) is live from Phoenix, Arizona. Brigitte Duclos (pictured) takes over as host as chat show Monday To Friday (3.30pm, Ten) returns for the new year. In Home And Away (7pm, Seven), time is running out for Irene (Lynne McGranger) to save Selina (Tempany Deckert). In the series debut of drama Pacific Drive (9.30pm, Nine), Sonia Kingsley sets off on her ritual morning jog and by the time she realises the beach vehicle is speeding towards her it’s too late. The series then continues with regular episodes at 11pm Monday and Wednesday nights.

Thursday: In Home And Away (7pm, Seven), Shane (Dieter Brummer) and Angel (Melissa George) decide it’s time to leave Summer Bay. Wild Life With Olivia Newton-John (7.30pm, Nine) reports on the fight to defend the habitat of the sloth in Brazil; the baboons of the rugged Drakenberg Mountains in Africa; and the tracking and filming of the hatching eggs of the jabiru in Queensland.