The gang of four
60 Minutes producer John Westacott insists that, despite Jana Wendt leaving the program to join the Seven Network, “We’re still the winning team!” Westacott concedes that losing Wendt is disappointing but still has full confidence in his team of reporters — Tracey Curro, Richard Carleton, Charles Wooley and Jeff McMullen. “They are the best television journalists in the country. So I am unconcerned about whoever may stack up against us. Clearly Jana is a great talent, but I wont think it (her leaving) will have any effect on the overall product or the stories we are covering.” Westacott also denied press reports that he was still looking for a fifth reporter to replace Wendt. “I don’t think we need to think about an extra body,” he said. Seven has yet to announce its plans for Wendt’s new much-talked-about current affairs program. 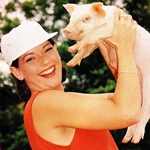 Samantha and Babe!
Wild Life reporter Samantha Kume (pictured) can no longer keep it a secret… she is having a baby. Kume, who also reads the weekend National Nine News in Brisbane, credits clever camerawork for her baby bump to have gone unnoticed by the public. “The cameras have been kind,” she told TV Week. “I am amazed we have been able to keep it a secret.”

Aussie stars stalked in LA
Former Home And Away stars Julian McMahon and Alistair MacDougall have become the target of a stalker while living in LA. The incident occurred just before Christmas when the pair were sharing a flat in Hollywood. “We were sitting at a restaurant and there was a guy sitting next to us. He was a psycho — a freaky looking guy,” MacDougall told TV Week. “He was staring at us the whole meal and when we left he was parked across the street and ran so quickly to get to his car he nearly got hit.” The pair drove off, and their stalker followed them home. “We were getting seriously scared.” Although both actors managed to score some high profile roles when first arriving in LA, the last 12 months have been quieter. “It’s hard, but LA is definitely home,” McMahon told TV Week. “You’ve got to keep plugging away and wait for that big one.” 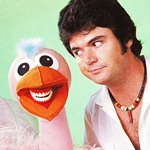 “Long-running hit show Hey Hey It’s Saturday would never get off the ground today, according to its host, Daryl Somers. Daryl, who has hosted the show since it began 25 years ago, says the concept is too risky for today’s networks. “If you walked into a producer’s office and told them what the show was about, you’d have no hope.” Daryl said it was Graham Kennedy who inspired him to follow a career into television. “I used to watch Graham on In Melbourne Tonight in the Sixties, and I’d think, ‘Gosh, what a great job. He looks like he’s having so much fun’. And he was, of course. I never, ever though then that I would end up being in a similar situation on a TV show where I could have so much fun for 25 years.” Daryl started on Hey Hey It’s Saturday appearing between cartoons. “I was the Sophie Lee of the Seventies!” he says. “Eventually the banter between Ossie (Ostrich) and me took over the show and we got rid of the cartoons,” Daryl says. “The show sort of fell together! John (Blackman) happened to be rostered on as a voice-over man one weekend. It was a three-hour show then and I used to ask what the weather was like outside. John came up with some pretty funny answers, so we made sure he was rostered on every weekend from then on!”.” 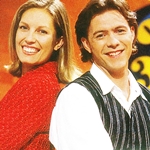 Thursday: In Neighbours (6.30pm, Ten), Luke (Bernard Curry) is on cloud nine after a romantic evening with Nadia (Dale Stevens).

Friday: In Home And Away (7pm, Seven), Shane (Dieter Brummer) is in a life threatening situation. Footy season is almost back, with the AFL Centenary Lightning Premiership (7.30pm, Seven) starting with Round One matches North Melbourne versus Melbourne, Fitzroy versus Collingwood, St Kilda versus Hawthorn and Brisbane versus Carlton, live from Waverley Park, Melbourne.