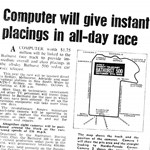 The Seven Network‘s telecast of the Bathurst 500 on Sunday 5 October 1969 boasted a leap in technology. A computer worth $1.75 million was linked to the racetrack to provide immediate overall and class placings.

The coverage from Sydney’s ATN7 involved more than 60 technicians, camera operators and other station personnel. Setting up the outside broadcast at Mount Panorama, outside of Bathurst, took three days and included eight cameras, including a ‘revolutionary’ miniature hand-held camera to be operated in the pits to capture the action as cars come in and out for repairs. ATN’s coverage was relayed to regional stations across New South Wales and to the Seven Network stations in Melbourne, Brisbane and Adelaide. For Melbourne viewers the 1969 race marked the annual event’s return to their screens as it not been telecast to Melbourne since moving from Phillip Island after 1962. (The race was previously known as the Armstrong 500)

The race was marred by an 18-car pile-up in the first lap. Six cars were damaged beyond repair but miraculously nobody was injured. The 500 mile race ended up being won by Colin Bond and Tony Roberts driving a Holden Monaro GTS350.

Coverage of the 1969 Bathurst 500 features in the latest batch of additions to Classic TV Guides.

Permanent link to this article: https://televisionau.com/2015/10/classic-tv-guides-bathurst-500.html