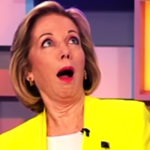 Network Ten‘s mid-morning show Studio 10 today reached the milestone of 500 episodes — a stellar achievement given the show is something of the underdog to rivals The Morning Show and Mornings.

The program has also survived where its lead-in program Wake Up was put to rest after only months on air and following the network’s director of morning television, Adam Boland, resigning due to health concerns.

As part of its celebration, Studio 10 broadcast a compilation of some of the highlights, and some possible lowlights, from the show’s almost two year history with various recollections from the cast and crew — including hosts Sarah Harris, Jessica Rowe, Ita Buttrose (pictured) and Joe Hildebrand — and executive producer Rob McKnight.

The tribute also acknowledged the show’s ability to switch from entertainment to serious when a major news story breaks — such as when the Lindt Cafe siege occurred in Sydney and Studio 10, normally a two-and-a-half hour program, went into rolling coverage for the network for eight hours.