The Sarge cops a bullet!
Dramatic scenes in Blue Heelers this week as Sgt Tom Croydon (John Wood, pictured with co-star Lisa McCune) is shot during a storyline which begins when internal investigations find a bong and some speed in his home. It is revealed that the bong belonged to Tom’s daughter, Susan (Beth Buchanan), but both she and Tom deny anything about the speed, while both are suspicious of each other. “Tom and Susan are not getting on real well,” Wood told TV Week. “Which is typical because they haven’t lived together for a long time.” The scene in which Tom is shot was distressing for all involved. “I was supposed to be shot in the collarbone, and there was a lot of bleeding,” he said. “We actually had advisors on set telling us how much ‘blood’ to use to look realistic. It was quite chilling to be lying on the floor with blood all down my arm. Some of the other actors were saying how shocking it was to run in and see me lying on the floor covered in all that blood.” It is only the third time in his 25 year acting career that Wood has been shot. The first was in Cop Shop — “My head was blown off!” — and the second was in an ABC drama, Catspaw. “If I’d been an American actor, I would have been shot six million times by now!”

Johanna joins Missing Pieces
Seven Network sports reporter Johanna Griggs is to co-host a one hour live-to-air special, Missing Pieces, billed as ‘Australia’s first interactive TV program’. To be co-hosted by Rob Guest (Man O Man), Missing Pieces will invite viewers to call in with challenges and clues to help solve some of life’s mysteries. The Seven Network has the option to extend Missing Pieces into a series.

Denise quits GP
Actress Denise Roberts, one of the original cast members of ABC‘s GP, is quitting the series. Roberts, who plays receptionist Julie Winters, will finish working on the show in October. “She feels she has gone as far as she can with her character,” an ABC spokesperson told TV Week. “She’s been there since day one and feels it’s time to move on.” Despite leaving GP, Roberts is still connected to ABC as associate producer and co-creator of its new drama series Correlli. The new 10-part series, starring Deborra-Lee Furness and newcomer Hugh Jackman, is now filming in Melbourne. As well as working behind the scenes, Roberts does make a guest appearance in Correlli as a security guard. 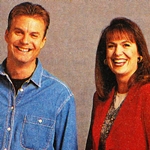 Tuesday: In Neighbours (6.30pm, Ten), Mal (Benjie McNair) and Danni (Eliza Szonert) look for a boarder to help with the rent. In GP (8.30pm, ABC), Vesna (Lenka Kripac) is unable to cope with the pressures of adult life after leaving school. In Blue Heelers (8.30pm, Seven), relationships begin to fray after unauthorised firearms are discovered at Wayne’s (Grant Bowler) house and a quantity of speed found at Tom’s (John Wood) place. 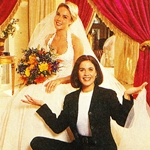 Wednesday: In Home And Away (7pm, Seven), Shannon (Isla Fisher) tells Pippa (Debra Lawrance) and Michael (Dennis Coard) that she is leaving. Jane Hall (pictured) hosts a new series of Weddings (7.30pm, Nine), going behind the scenes at the average and not-so-average wedding. The conclusion to Celluloid Heroes (8.30pm, ABC) looks at the history of Australian cinema between 1948 and 1971, and then to the present day. In Halifax fp: Lies Of The Mind (8.30pm, Nine), a beautiful heiress, destined to inherit $80 million on her father’s death, is suspected of committing his brutal murder. However, the young woman claims to have numerous personalities, any of whom could be responsible for the killing.