A flowering friendship
Hey Dad! co-stars Rachael Beck and Ben Oxenbould (pictured) are not just colleagues but are the best of friends.  “To a certain extent our relationship is an escape,” Oxenbould told TV Week.  “Because we do get on so well, we can talk about anything to each other.  The writers of Hey Dad! have picked up on our natural chemistry and have noted that the scenes we do together have been very good.” For Beck, their friendship has a calming influence.  “I get very wound up about things,” she says.  “All I do is speak to Ben and he calms me down.”  But despite their close working relationship the pair are not a couple, with Beck currently in a relationship.  “Well, I just had to go out and get a boyfriend because (Ben) wouldn’t have me,” Beck said jokingly.  Beck and Oxenbould also dispel any rumours that they are soon to be leaving the series.  “I’ve got a few things on the boil, singing here and dancing there, but they are extracurricular activities,” Beck said. “I’ll stick it out until the end of the year, for sure,” Oxenbould said.  “I’ve still got a year-and-a-half of my contract, anyway.” 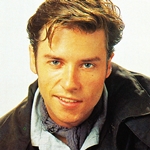 Snowy River to run in US
Australia’s most expensive mini-series production, The Man From Snowy River, is set to be watched by millions in the US.  The $11 million production will screen on the American Family Channel later this year to an estimated audience of 55 million.  Starring Andrew Clarke and Guy Pearce (pictured), The Man From Snowy River also features Wendy Hughes, Victoria Tennant, John Stanton, Brett Climo and Joelene Crnogorac.  Meanwhile, the series is currently at the centre of legal action by the producers of the 1982 film The Man From Snowy River, although series co-producer PRO Films insists that its production is not based on the story of the film and that the concept, based on the classic Banjo Paterson poem, is publicly property.  The case is listed for hearing in September. 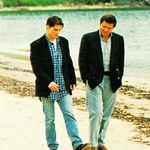 ‘Just a nice, normal megastar’
The Nine Network‘s Ray Martin has given an insight into Tom Cruise after the actor granted Martin his only interview on his recent Australian visit.  “What is he like?  Well, he’s really normal. A really nice bloke,” Martin said. “When you think about it, that’s pretty amazing.  Because Tom Cruise is the world’s biggest box office film star today. His movies have raked in more than $2 billion. Not one has bombed in more than a decade (even Far And Away made $200 million). And he’s regularly voted the sexiest man on Earth. Maybe that’s why he laughs so much. So easily. He’s a very comfortable megastar. Still, he’s quite open about his childhood: a broken home, 15 different schools and overcoming dyslexia. But, no great traumas, he insists. And laughs again. But what about that scene on A Current Affair the other night, when (wife Nicole Kidman) was pleading with the photographer to ‘please leave us alone’? ‘Oh, that was just one guy who was really rude.’ For a moment he stops smiling. ‘I hate it when they’re rude to Nick’.”

“There was shock-horror among the populace and predictions of imminent world destruction from the moral majority when the word leaked out in America that Mariel Hemingway, star of the legal drama Civil Wars, was going to take off her clothes on TV. Ms Hemingway dropped her briefs of a strictly non-legal nature for a minute or two, revealing slightly less than one would normally see on a suburban beach on a sunny day in staid old Melbourne. The audience figures for Civil Wars rose for the same minute or two, then everyone yawned and decided that life could go on after all. By Australian standards, the scenes are mild. They make the gone-and-almost-forgotten Chances look hardcore by comparison. (Producer) Steven Bochco, of course, established his legal credentials with LA Law, which Civil Wars will replace in Network Ten‘s schedule soon. Network Ten, of course, will be delighted if the new series works as well as the show it is replacing, although — given the time it took for LA Law to become established — it’s hard to see that happening.”

Monday: In A Country Practice (7.30pm, Seven), Bronwyn Gibson (Jane Harders), a famous Shakespearean actress, arrives for Wandin Valley’s production of Macbeth — and preparations turn chaotic as Bernice (Judith McGrath) and Esme (Joyce Jacobs) fight over creative control. Masterpiece (8.30pm, SBS) presents the documentary Beauty Saves The World, filmed during the Bolshoi Ballet’s 1992 Australian tour and tracing the history of the Russian ballet and its role in the establishment of classical ballet in Australia.

Tuesday: Ray Martin Presents (8.30pm, Nine) features an interview with US actor Tom Cruise, who talks about his personal and professional life, his Australian wife, Nicole Kidman, and their new daughter Isabella Jane.

Saturday: In Beyond 2000 (7.30pm, Seven), Amanda Keller discovers a company in Wales which produces a smokeless barbecue fuel; and Andrew Waterworth joins the team of researchers at the European Space Agency that is developing a five-stage ecosystem. Garry McDonald, Susan Lyons, Judy Morris and Don Barker star in the series return of Eggshells (8pm, ABC).   Seven crosses to Florence for Day Two of the Davis Cup (12am).