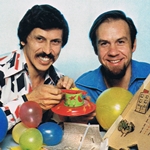 The Adelaide-based children’s show The Curiosity Show has returned to a new generation of viewers.

The show’s original presenters Dr Deane Hutton and Dr Rob Morrison have always owned a half-share of the rights but the remainder was tied up with producers Banksia Productions which has been in liquidation.

Hutton and Morrison have bought out Banksia’s share of the rights and now have access to around 500 episodes of the program — with segments to be uploaded to their new YouTube channel which launched on Friday.

The program, which presented segments based on science, natural history and technology, was sold to overseas markets including Europe and — in 1984 — won the international Prix Jeunesse award for excellence in children’s television.

With many of The Curiosity Show‘s segments involving a do-it-yourself element, presenting videos on YouTube makes it easier for viewers to follow along.   “For a lot of material, especially making-and-doing segments, online delivery is better than television,” Morrison said. “You can freeze or replay segments to see how to make something. You couldn’t do that on television.”

The Curiosity Show was last in production in 1990 but if there is sufficient demand for the online content then it may allow for new material to be produced.

Meanwhile, Humphrey B Bear, whose program led to the creation of The Curiosity Show, has also staged an online and TV comeback.  Since the rights to the Humphrey brand were sold to games company Imagination, Humphrey B Bear is now on YouTube and also appears on various community TV stations in a nightly “goodnight” segment broadcast at 7.30pm:

Permanent link to this article: https://televisionau.com/2013/07/the-curiosity-show-stages-online-comeback.html