Hey, who’s going to replace Daryl?
Hey Hey It’s Saturday host and producer Daryl Somers is trying to find the right candidate to take over as a guest host for when he jets to London to attend the world premiere of musical Sunset Boulevard next month.  John Farnham was an early possibility but is unavailable due to recording commitments.  Steven Jacobs (All Together Now and also a co-host of the former Saturday At Rick’s) and David Reyne (Getaway) are other possible contenders.  “We are canvassing widely, but when you get down to it, only a small number of people have the disciplines needed,” Somers told TV Week.  “I would like to think the show could function without me there all the time, and I’ll never know until I let someone else step in.”  After the London trip Somers will also be absent during August while he films a series of commercials for the Northern Territory Tourism Board. 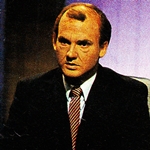 Eric’s current affair with comedy
“A few months ago I was still doing stand-up and dreaming of something like this,” says Full Frontal cast member Eric Bana.  The 24-year-old is already making his mark in the show with his parody of current affairs host Mike Willesee, a role that requires three hours in the make-up chair.  In Full Frontal he’s also appeared as Tom Cruise, Billy Ray Cyrus and Paul Mercurio.  “Full Frontal is my first TV role, and it’s like playing your first game in a grand final.  But I’m pretty level-headed about it, because it hasn’t really hit me yet,” he said. 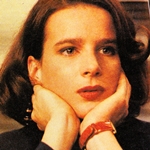 Blinds lifted on Aussie spies
Secrets, the new ABC drama from the producers of Phoenix, takes viewers into the world of secret agents.  The intelligence agency depicted in the 13-part series, The FIRM (Foreign Intervention and Revolutionary Management), is loosely based on ASIO.  Production is currently taking place within a converted brewery held by the National Trust in North Melbourne.  Secrets stars Marshall Napier as FIRM’s senior case handler Gary O’Leary and features Tony Poli, Michael Fry and newcomer Rachel Griffiths as new recruits to the agency.  “I was very excited to be working on a project by the producers of Phoenix, and in this series too, they are uncompromising in the quality they are after,” Griffiths (pictured) told TV Week.

Monday:  In A Country Practice (7.30pm, Seven), Rosemary (Maureen Edwards) is frustrated with community attitudes when she tries to help a mother and daughter obtain refugee status.  Day Five of The Ashes Second Test (8.30pm, Nine) is followed by a late start to coverage of the first day’s competition at Wimbledon (3am, Nine).

Tuesday:  The Best And Worst Of Red Faces (8pm, Nine) again presents a collection of the best, worst and most memorable acts to have appeared on the Hey Hey It’s Saturday talent contest.  As part of National Refugee Week, actor Jack Thompson, his son Patrick and a United Nations team look at the suffering of the children of war-torn Cambodia in The Children Of Krousar Thmey (8.30pm, SBS). Documentary series Labor In Power (9.30, ABC) is up to the late 1980s where the Hawke Government is fighting for survival, with Prime Minister Bob Hawke seeking a third term in government.  Wimbledon resumes at the earlier timeslot of 10.35pm (Nine).

Thursday:  Even though Sex is now no longer, the 9.30pm timeslot is now occupied by two British productions of a similar theme — The Agony Of The Ecstasy (Seven) and The Good Sex Guide (Nine).

Friday:  The Second Test in the Rugby League Test Series is telecast live from Palmerston, New Zealand (7.30pm, Seven), followed by highlights of the AFL match between North Melbourne and Hawthorn (9.30pm, Seven).

Saturday:  In Beyond 2000 (7.30pm, Seven), Amanda Keller reports on a method for testing the fat quantity in frozen meat, and Dr John D’Arcy investigates the proposed Boeing 747 capable of carrying 1000 passengers.