On the evening of Tuesday, 16 February 1988, the Ten Network debuted sketch comedy series The Comedy Company — and with that came the arrival of some future household names: Kylie Mole (pictured), Col’n Carpenter, Uncle Arthur and Con The Fruiterer.

(Although, technically, some of these characters had appeared on an earlier comedy show, The Eleventh Hour, a late-night series which had a brief run on HSV7 in 1985)

The Comedy Company was originally only destined for a limited run at 9.30pm on Tuesday nights, debuting up against the brash Dame Edna Experience on Seven and the Winter Olympics on Nine.  But then a gap appeared in the schedule, 7.30pm Sunday — the most daunting of all timeslots. Ten had been screening a US variety show starring Dolly Parton in that timeslot but it was being belted in the ratings by long-running timeslot king 60 Minutes (Nine) and Seven‘s new comedy import ALF.  A punt was made to shift The Comedy Company from the adults-only 9.30pm timeslot to the more family-friendly 7.30pm Sunday timeslot.

Within weeks The Comedy Company had done the unthinkable — it had beaten 60 Minutes, and it would continue to do so for much of the year.  There was a certain irony that a multi-million dollar current affairs show was being beaten in the ratings by a comedy upstart produced on the smallest of budgets — with some skits held in the most barely-constructed of sets.  And The Comedy Company was not exactly high-brow or cutting edge comedy, as its 7.30pm timeslot meant it couldn’t overly rely on smut, innuendo or coarse language, either.  It became popular family entertainment with wide generational appeal.

Because of its ratings success in its new timeslot The Comedy Company was extended from its initial limited run to the full year.  This extended run put a strain on the show’s creative and writing resources — having to conceive, script and produce an hour’s worth of skits with a week’s turnaround, and having to repeat the process every week for the rest of the year — and led to an expansion of the ensemble cast, with Peter Rowsthorn, Russell Gilbert, Christine Keogh and Paula Gardiner becoming regular cast members.

The Comedy Company also became the destination for a number of visiting celebrities — including Sylvester Stallone and Julian Lennon — and often called on Ten’s other ratings hit Neighbours for guest stars.  Prime Minister Bob Hawke also made a guest appearance in one episode.  Other guest stars included actress Sigrid Thornton and comedian Gina Riley. 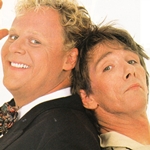 The show continued through to the end of 1989 essentially maintaining the same cast line-up and format but inevitably the ratings were starting to fade, as Ten overall was in ratings decline, and the show’s rapid-fire production was leading to burning out.  The show went into an extended break in 1990 as two of its stars — Mark Mitchell and Kim Gyngell (pictured) — starred in their own spin-off shows, Larger Than Life and Col’n Carpenter.

The Comedy Company came back in July 1990 in a revamped format, with almost an entirely new cast.  The new version of the show, again placed in the 7.30pm Sunday timeslot, failed to hit the creative or ratings highs of its predecessor and it ended the year quietly.  Production of the Col’n Carpenter sitcom continued for a couple more years and Media Arts moved onto other projects including Cluedo, Let The Blood Run Free, Bingles and Newlyweds.

At a time when Australia was in the grips of recession, The Comedy Company sparked a trend of sketch comedy on Australian TV — including The Big Gig, D Generation specials and Fast Forward, with the latter upping the ante in production values and political satire.