Thirty years ago, the Seven Network and lawyer-turned-comedian Steve Vizard gave the 10.30pm timeslot a shake-up with their new variety show, Tonight Live With Steve Vizard. Vizard had been part of the team involved in the late-night sketch comedy series The Eleventh Hour, made for HSV7, Melbourne, in 1985. While many of his fellow cast …

END_OF_DOCUMENT_TOKEN_TO_BE_REPLACED

Permanent link to this article: https://televisionau.com/2020/01/30-years-since-tonight-live-began.html 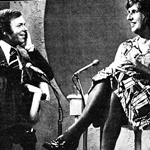 Continuing this week’s theme of the top 60 shows from Australian television over 60 years. See also Part I, Part II and Part III. 30. We Can Be Heroes (ABC, 2005) Comedian Chris Lilley had a stand out hit when he played not one but all six lead characters vying for the title of Australian …

END_OF_DOCUMENT_TOKEN_TO_BE_REPLACED

On the evening of Tuesday, 16 February 1988, the Ten Network debuted sketch comedy series The Comedy Company — and with that came the arrival of some future household names: Kylie Mole (pictured), Col’n Carpenter, Uncle Arthur and Con The Fruiterer. (Although, technically, some of these characters had appeared on an earlier comedy show, The …