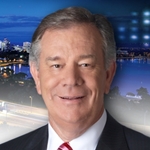 While the Ten Network has said farewell to a number of staffers as it ends the ratings year, the Nine Network‘s Perth newsroom also had a departure tonight.

Newsreader Greg Pearce has announced his resignation from the news desk at STW9 in Perth after a five-year stint.

In a statement published by News Limited, Pearce thanked viewers and colleagues for their support:

“It has been wonderful to bring Nine News into the homes of our loyal viewers for the past five years and I feel privileged to have had the opportunity.  I would like to thank the Perth news team for their support during my time at Channel Nine. My colleagues are a talented bunch and I wish them well for the future.”

Pearce was a news presenter at ABC and later STW9 in the 1980s before moving to Melbourne to read Seven National News for a year.  He returned to Perth in 1988 as NEW10 was about to launch, and Pearce would go on to front its main evening bulletin for almost twenty years — including several years when the Perth newscast was based in Sydney.

He eventually left Sydney to return to WA, initially to ABC Radio in Bunbury before returning to STW9 in 2008 as newsreading partner to Dixie Marshall.  Marshall resigned from the station last year.

News Limited speculates that Pearce may be headed back to the Ten Network as his former boss at Nine, Adrian Beattie, is now news editor at Ten in Perth.

Permanent link to this article: https://televisionau.com/2012/11/farewell-friday-2-nine.html