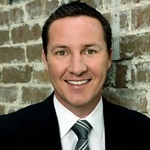 As well as today’s public farewells from Ten and Nine, the Seven Network‘s Matt White (pictured) has announced he is stepping down as host of the east coast edition of Today Tonight.

In a statement issued today, White says he is looking forward to new challenges at Seven:

“It’s time for me to take on other challenges at Seven and continue pursuing my number one love – live television.  I’ve always prided myself on being versatile, and hosting Today Tonight allowed me to see a different side of television under the spotlight of 6.30.  It’s been a lot of fun, a lot of hard work and I have worked with a terrific and dedicated team.  Bring on the V8 Supercars this weekend, and then a holiday.  Then, it’s time to play somewhere else – so watch this space.”

A former sports presenter at regional network NBN and Network Ten, White joined Seven in 2004 as Seven News and Sportsworld presenter but his career took a turn in another direction in 2008 when he replaced Anna Coren as host of the east coast edition of Today Tonight, based in Sydney.

He was also a competitor in the 2009 series of Dancing With The Stars and has appeared as fill-in host on Sunrise.

White’s departure from Today Tonight and the recent retirement of Seven’s network news chief Peter Meakin fuel speculation that there may be changes coming to Seven’s 6.00pm news and current affairs hour as it faces increased ratings pressure against a resurgent Nine on the east coast, particularly in Melbourne.

Permanent link to this article: https://televisionau.com/2012/11/farewell-friday-3-seven.html