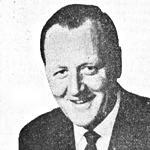 Len Mauger, one of Australia’s first and longest serving television executives, has died in Sydney at the age of 89. Mauger had worked in radio, including as an announcer at Melbourne station 3AW, before becoming a senior executive at ATN7, Sydney’s second commercial station which launched in December 1956. In September 1963, transport chief Reg …

END_OF_DOCUMENT_TOKEN_TO_BE_REPLACED

Permanent link to this article: https://televisionau.com/2012/11/obituary-len-mauger.html