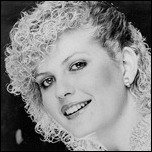 Edith Bliss, a former Australian pop singer and television presenter, has died at the age of 53 after a long illness.

Brisbane-born Bliss hit the Australian charts in the late 1970s with the single If It’s Love You Want followed by two more singles and an album, Total Bliss, in 1980.

She then went on to television as a reporter for popular children’s program Simon Townsend’s Wonder World.

A decade later she was on television again as a presenter for Townsend’s other venture, ABC program TVTV.

Bliss married Mark Tanner, a sound mixer on Wonder World, and they had four children.

In 2006, under her married name Edith Tanner, she appeared as a contestant on the final episode of game show Wheel Of Fortune.

Daughter Eden had posted a message on Facebook, saying her mother “passed very peacefully early this morning and her infectious spirit will be missed by all. You’re with the angels now, Mum.”

Permanent link to this article: https://televisionau.com/2012/05/obituary-edith-bliss.html