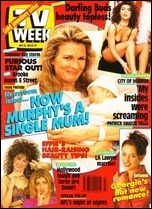 Living in the Seventies
Despite the Seventies being the era of ‘sex, drugs and rock ‘n’ roll’, All Together Now star Jon English confesses that he can look back on that era without too much embarrassment, insisting that he never played up to the image of a high-profile actor-singer during that period.  “I was never into that sex and drugs thing, to tell you the truth,” he told TV Week.  “In the bulk of the Seventies I was appearing in the theatre eight times a week (in Jesus Christ Superstar).  I watched everything in that era from the edge of the stage.”  Meanwhile English’s co-star Rebecca Gibney admits that as a teenager in the that era (“14 trying to be 25”, she said) she was a big fan of the rock performer.  “I wrote to Jon once but he never replied,” she said.  “I loved his music, had his albums and went to his concerts.”  The Nine Network sitcom has adopted a retro theme for this week’s episode as the show’s characters stage a Seventies-style “sit-in” while re-living the Woodstock era. 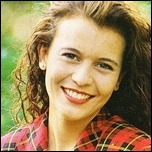 Long-distance romance?
They might be rivals in children’s television and working in different cities, but Melbourne-based Saturday At Rick’s co-host Lochie Daddo and Brisbane-based Saturday Disney’s Sofie Formica (pictured) are denying reports that they are romantically linked.  “Just good friends,” Daddo told TV Week.  “I ended up doing a pilot for an afternoon show in Brisbane for Ten.  We went out for dinner one night.  It was like a blind date.  The next four or five weeks, for some reason or another, I was up there nearly every weekend for work.  So I saw a lot of Sofie.  We are still very good friends.”  Daddo has recently joined Saturday At Rick’s following his first professional acting role in an episode of All Together Now.  “As a result of All Together Now, I was a guest on Rick’s,” he said.  “Then they said, ‘Do you want to do the show?’.“  Meanwhile, Formica has recently returned from Turkey where she was an Australian delegate at the European Broadcasting Union’s international workshop for children’s television presenters, and has since started a new role as host of Seven’s children’s quiz show Now You See It. 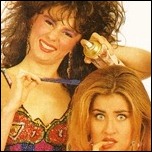 The hair of the wog!
Acropolis Now’s self-styled beauty queen Effie (Mary Coustas, pictured near right) and friend Sophie (Sheryl Munks) have decided that the cafe’s resident career woman Suzanna Martin (Nicki Wendt, far right) is in dire need of assistance.  “Suzanna looks like the ‘before’ lady on the shampoo commercial,” Effie told TV Week.  “She’s got very fine hairs.  I want to give her a good root perm, which will stuff up her hairs for five years.”

Briefly…
Hey Hey It’s Saturday’s Daryl Somers has been busy working on two additional projects.  The first is a series of one-hour specials, The Best (And Worst) Of Red Faces, highlighting some of the acts to have appeared on the mock talent quest segment since it started back in the early 1980s.  “It’s been a huge job for everyone involved, endeavouring to find every segment ever done – the oldest piece dates back to 1982,” he told TV Week.  The second project is a movie to star the team from Hey Hey It’s Saturday, to be filmed in Brisbane and Melbourne. 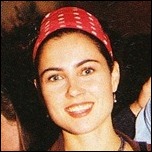 Late last year, Home And Away star Dee Smart (pictured) described working on the series as being like a prison sentence.  (“It feels like I’ve been there for years,” she said at the time)  Now it seems her desire to be written out of the show will be realised with producer Andrew Howie agreeing to let her go in July.  Her departure could lead to some challenging times for the soap, which recently celebrated 1000 episodes, with co-stars Nicolle Dickson and Bruce Roberts also contemplating leaving.

E Street’s Brooke ‘Mikey’ Anderson has been dumped from the series 10 weeks before her contract was due to expire.  The young star, who had been in the series since it started three years ago, has already starting filming a guest role in rival series A Country Practice.

Lawrie Masterson: The View From Here
”It wasn’t until the Seven Network ran Blackadder back-to-back with Fast Forward that the Rowan Atkinson series gained anything more than a cult following in this country.  Unfortunately, the series was long gone before an audience large enough to be commercially viable had starting lamenting it.  The ABC, however, grabbed the rub-off advantage and screened the first series of the more recent Atkinson creation, Mr Bean.  Be warned.  A second Bean series is now set to premiere.”

Program Highlights (Melbourne, May 24-30):
Sunday:  Actor, dancer and choreographer Paul Mercurio and colleague Kim Walker are guests on this week’s Sunday Afternoon With Peter Ross (ABC).  Network Ten presents the second series final on New Faces With Bert Newton, while Nine’s Our World documentary series features Adventure Bound with Alby Mangels.  Anne Phelan is a guest star on comedy series Late For School (Ten).  Sunday night movies are Masquerade (Seven), The Freshman (Nine) and Voices Within: The Lives Of Truddi Chase (Ten).  ABC’s late night series Compass features the story of religious academic John Hull, who documented his experiences as his sight gradually deteriorated from the age of 17 to middle-age when he became completely blind.

Monday:  This week’s Six Pack (SBS) feature is Loulla, a story set in the 1950s of the arrival of an unexpectedly glamorous proxy bride from Greece to a rural backwater in Australia, starring Lenita Vangellis. 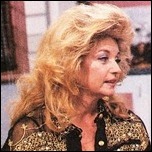 Tuesday:  In Beyond 2000 (Seven), Amanda Keller tastes the grain that could feed the Third World, while Tracey Curro investigates the treatment that’s forcing cancer to mature.  Seven later presents a delayed telecast of the AFL State Of Origin match between Victoria and Western Australia from the MCG.  In Chances (Nine), Bambi Shute’s (Abigail, pictured) sex show is a hit.  ABC presents the series return of comedy DAAS Kapital, featuring the Doug Anthony All-Stars. 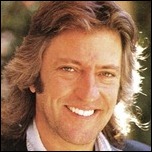