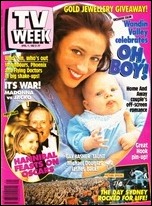 Hello, baby… and goodbye to Wandin Valley!
The birth of James Gardner Tyler in A Country Practice will mark the end of an era as his parents Matt (John Tarrant) and Lucy (Georgie Parker, pictured) depart Wandin Valley with their newborn to start a new life in Vietnam.  For Parker, there are no regrets about moving on from A Country Practice.  “I need to move on,” she said.  “If I stayed, it would wane.  I would rather finish on a high.  ACP has been a very positive experience.  It was wonderful to have a regular job and to work with people who had a healthy attitude to the business and weren’t seduced by it.  ACP helped me develop a good attitude towards TV.”  Parker’s next career venture is the title role in the stage musical Gypsy, starring beside Tony Barber and Geraldine Turner.

Stefan and Gayle pack their bags
Stefan Dennis, one of Neighbours’ original cast members, is leaving the long-running series.  Dennis is expected not to renew his contract when it expires in July although producers insist that negotiations are still under way.  “If he does leave, we’ll have him on air until September,” a Network Ten spokesperson said.  If Dennis does leave, the only remaining original cast members in the series will be Anne Haddy and Alan Dale.  Meanwhile, Gayle Blakeney, who plays Dennis’ on-screen wife Christina, is also set to leave the show when her contract expires in July. 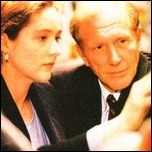 Cops out!
ABC drama Phoenix is set to lose two of its high-profile stars when a second series goes into production later this year.  Paul Sonkkila, who plays Inspector Jock Brennan, is leaving for personal reasons, and Nell Feeney, who plays Detective Senior Constable Megan Edwards, will not be returning.  “Nell’s character was brought into Phoenix for the bombing storyline, which ends with the first series,” an ABC spokesperson told TV Week. 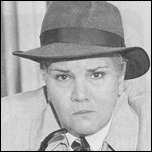 Former Prisoner stars Betty Bobbitt, Lois Collinder and Marilyn Rodgers are now on the hunt for “criminals” in the Comedy Festival production Peroxide, a send-up of the old Australian TV cop shows. “We are three police officers looking for a despicable character who has been spreading blonde jokes,” Bobbitt (pictured) told TV Week.  “We become the Peroxide squad!”  Bobbitt is no stranger to the early TV cop shows.  When she first arrived in Australia in the 1960s, she played various roles in shows including Matlock Police, Homicide and Division 4.  “I played anything from madams in whorehouses to housewives with children.  I have very happy memories of my cop show days.” 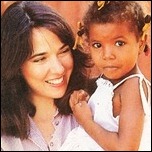 Viewers will see a different side to Steve Vizard when he presents the upcoming World Vision special The Forgotten World.  The program features Jennifer Keyte (pictured) and actor Tom Burlinson, who travelled to Latin America and Africa for the special.  “With something like this, you only have to get people to pay attention,” Vizard told TV Week.  “Once you see the work World Vision is doing, you’d have to be a halfwit not to sit up and take notice.”

Production has stalled on the Nine Network series Snowy.  The 26-part drama focusing on the Snowy Mountain Scheme has run into financial difficulties.

Lawrie Masterson: The View From Here
”You must have noticed television’s obsession with putting on trial anything remotely controversial.  No doubt this most recent spate of TV trials was kicked off when the late but unlamented Fat Cat was convicted without much of a hearing, then executed come the dawn.  Jana Wendt and A Current Affair kept the ball rolling by gathering a bunch of lawyers and witnesses and a retired supreme court judge and spending two futile nights pondering whether or not the Prime Minister, Paul Keating, has murdered the Australian economy.  Mr Keating’s day in court was followed by ABC’s Live And Sweaty putting the Nine Network in the dock for its treatment of the NSW Rugby League replays.  Nine apparently stands charged with not replaying games in their entirety.  After that, we had the real kangaroo court – Skippy, a marsupial native of the Australia bush, put himself on trial, probably because no-one else could be bothered doing it.  I haven’t caught up with the result of that laughable exercise yet.  If you have, do me a favour and keep it to yourself.”

Tuesday:  In Beyond 2000 (Seven), Bryan Smith discovers the paper that’s made of corn, and Amanda Keller tells how super computers are helping the British to predict the weather.  In Chances (Nine), Alex (Jeremy Sims) signs Faith Matthews, a 17-year-old Olympic swimming golden girl, but gets more than he bargained for.  In A Country Practice (Seven), Gil (George Whaley) offers Matt (John Tarrant) and Lucy (Georgie Parker) an opportunity to leave Wandin Valley.

Thursday:  In Phoenix (ABC), the police force are questioning the resources spent on the Phoenix investigation.  In Neighbours (Ten), Dorothy (Maggie Dence) and Lucy (Melissa Bell) believe they may have killed Faye’s (Lorraine Bayly) best friend.

Saturday:  Nine’s Wide World Of Sports includes live coverage of the Stawell Gift, the Doncaster Handicap and the AJC Derby.  Seven’s evening includes AFL Today, highlights of the day’s AFL matches, followed by live coverage of the Brisbane Bears versus West Coast Eagles from Carrara, Queensland.  Ruth Cracknell and Gordon Chater star in Sydney’s Theatre Royal production of The Importance Of Being Earnest, broadcast on ABC.