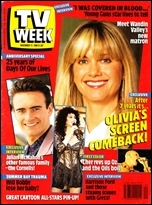 Livvy’s Christmas surprise!
After a seven-year break from acting, former Aussie star Olivia Newton-John (pictured) is making her dramatic TV debut in a telemovie, A Mom For Christmas.  The movie, currently in production in Cincinatti, Ohio, is set to go to air in the US on Christmas Eve.  The Seven Network has decided to hold off screening the telemovie in Australia until next Christmas.

Meet ACP’s new matron
The contracts are still being finalised, but JNP Productions have announced that actress Maureen Edwards will be taking on the role of the new matron in A Country Practice – replacing Mary Regan, whose character Ann Brennan makes her departure from the series early in the new year.  Edwards’ other recent TV appearances have included roles in Skirts and, ironically, A Country Practice.  In her last ACP appearance, Edwards played Sydney neurosurgeon Katherine D’Angelo. 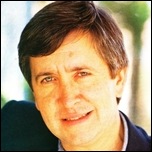 Counter attack
ABC’s 4 Corners host and radio 2BL morning presenter Andrew Olle (pictured) has spoken in defence of A Current Affair host Jana Wendt over her recent interview with Bob Hawke, where she questioned the honesty of his emotions over China, that is said to have enraged the prime minister.  “I think it is great that he’s been reminded that it is not just ABC interviewers who sometimes ask him tough questions,” Olle told TV Week.  “He and several ministers in his Government have almost made a point of being nasty to the ABC whenever they get a chance.  I interviewed Hawke about the coup in Fiji.  It became very tense.  He was in Adelaide, I was in Sydney.  Afterwards, he strolled off the set and in a foul-mouthed way let off steam to all the people in the studio, being very unpleasant to all and sundry.”  Olle also lists Wendt amongst the peers he most admires:  “She has a wonderful detachment.  I like the way she has been to resist the commercial machine, which gets hold of a woman and shapes her as a commercial property.  And she is very nice person… not an easy thing to be with al the adulation that comes her way.”  He also talked about an offer to join Nine’s 60 Minutes, but decided that professional satisfaction and his ABC salary is worth more than the bigger budgets on offer by commercial television.  “There is more money to be made outside,” he says.  “But you have to consider what it means to your life.  It has to be weighed up: satisfaction and greed.”

Briefly…
Legendary daytime soap opera Days Of Our Lives has recently celebrated 25 years on air in the US, having started in November 1965, although in Australia the series starting screening in 1968 and at this stage is two years behind the US. 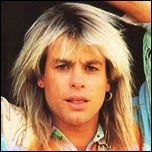 Aussie rules footballer Warwick Capper (pictured), appearing as a contestant in Celebrity Family Feud this week, has told TV Week he has ambitions to be a film and TV star.  He made his acting debut in three episodes of Neighbours back in 1987, alongside Kylie Minogue, and is keen to try a “longer, ongoing role”.

It’s a dramatic season finale coming up for Home And Away when pregnant Bobby Simpson (Nicolle Dickson) experiences stomach cramps and collapses in the Summer Bay diner.  She is rushed to hospital and admitted to intensive care, but Seven’s publicists are saying nothing about the outcome which is set to be revealed when the series returns in the new year.

John Laws says…
”The ABC screened an entertaining documentary about life in Australia in the Fifties and Sixties.  It was called The Baby Boomers Picture Show and for those of us for whom it had relevance it was a nostalgic look at life as we often remember it to have been.  The Baby Boomers, though, gave us an Australia through rose-tinted glasses.  It saw the past as having possessed a dream-like quality of contentment, happiness, innocence and mateship.  Which is true, but only to a certain extent.  There was misery, war, uncertainty, murder and poverty in the Fifties and early Sixties, but despite this, street kids were exactly that, kids who played in the street.  Crack was something you found in the pavement and “heroin” was the female lead in a movie.”

Monday:  Australian actress Sigrid Thornton stars in the US series Paradise, returning tonight on HSV7.  Andrew Denton’s The Money Or The Gun (ABC) presents its final episode for 1990.  With Tonight Live With Steve Vizard now on its summer break, HSV7 replaces it with a late-night edition of Seven Nightly News with newsreader Naomi Robson.

Friday:  Test Cricket begins for the season as GTV9 crosses to the Gabba, Brisbane, for the first day’s play of the first test between Australia and England.