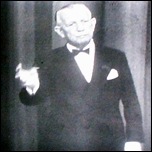 It started life at the turn of the 20th century as a piano factory, and then a soup factory.

Then, in 1956, the building at Bendigo Street, Richmond, became part of the dawn of the new industry of television and went from producing 57 varieties of soup to a variety of a completely different kind.

For over fifty years it has been ‘Hollywood-on-the-Yarra’ as it has produced television programs – variety, drama, comedy, children’s programs, sports, news and current affairs – that are among the most loved and most popular in the country. 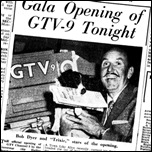 It was where the Victorian governor Sir Dallas Brooks (pictured, above) made his grand entrance on GTV9’s opening night – 19 January 1957 – by entering the studio in a chauffeur-driven limousine. The two-hour variety program that followed, featuring names like Bob and Dolly Dyer, Toni Lamond, Frank Sheldon, Ron Blaskett, Terry Dear and Lou Toppano’s orchestra, certainly set the tone that this new channel was going to have a clear focus on light entertainment and variety – and it certainly delivered that in the decades that followed. 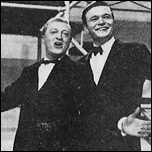 A few months after GTV9’s lavish opening night, a shy radio star named Graham Kennedy made his first TV appearance and shortly after made his TV hosting debut on a variety show, In Melbourne Tonight. The show would continue for over a decade and earned Kennedy the nickname of the King of Australian TV. It is a title that nobody has dared to challenge ever since.

In 1959, Kennedy was joined by Bert Newton (pictured, right, with Kennedy in 1964) – a personality from rival channel HSV7 who had resigned from his employer on-camera before making the move to GTV9. For his debut at GTV9 he was placed next to Kennedy to present a commercial during IMT. It was the beginning of a long-running professional partnership and a personal friendship that would last decades. 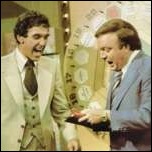 In 1964, with a new rival TV channel – ATV0 – about to debut, GTV9 expanded its premises to a new state-of-the-art studio, Studio 9. It was a studio built specifically for IMT but would go on to host a list of productions in the years that followed – including New Faces, The Graham Kennedy Show, The Don Lane Show (pictured), The Ernie Sigley Show, Hey Hey It’s Saturday, The Paul Hogan Show, Family Feud, Sale Of The Century, The Daryl Somers Show, Tonight With Bert Newton, Blankety Blanks, All Together Now, The Price Is Right, The Footy Show, Burgo’s Catch Phrase, Don’t Forget Your Toothbrush, Starstuck, Who Wants To Be A Millionaire, Temptation, Bert’s Family Feud and Millionaire Hot Seat.

As well as variety and light entertainment shows, 22 Bendigo Street – or ‘Television City’ as it became known – was home to several drama series including Emergency, one of the earliest TV drama series ever made in Australia, Division 4, The Sullivans, Starting Out, The Flying Doctors, All The Way, Chances, Halifax fp and Stingers. 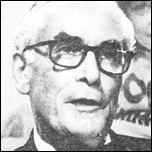 This Saturday night, the Nine Network pays tribute to the stars and the shows that have come from the famous studios as it prepares to move out from the building.

After Daryl Somers and his team sign off from the final episode of Hey Hey It’s Saturday for 2010 from Studio 9, Nine will cross to Bert Newton and Eddie McGuire in Studio 1, back where it all began with Sir Dallas Brooks and the early days of IMT, to present Lights, Camera, Party! – Television City Celebrates.

The two-hour special will feature some of the people, programs and magic moments that have featured from the legendary television studios over the past 53 years. The studio audience for the program will be made up entirely of past and present Nine Network personalities. 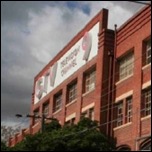 The building at 22 Bendigo Street was purchased by Vivas Lend Lease earlier this year with a plan to redevelop the historic site as a residential and retail precinct. The building’s original red brick exterior is heritage protected but the remainder of the site, including extensions such as Studio 9, will be redeveloped and will include some design aspects that will acknowledge the site’s significant heritage.

GTV9 has entered into a long-term agreement with the inner city Docklands Studios for future large scale productions – while other functions of the channel will be relocated to new premises in the Docklands precinct nearby.

Somers, whose TV career began as host of Cartoon Corner and Hey Hey It’s Saturday in the early 1970s, had previously suggested that part of the redevelopment be reserved for a TV museum and he has now been reported to be considering producing a documentary on the history of the famous studios.