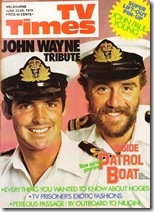 Timeless Land stars are cast
Michael Craig and Angela Punch will both return to Australia to star in ABC’s new big-budget series The Timeless Land, described as Australia’s own Forsythe Saga.  Production of the eight-part series, set in the 25 years following the arrival of the First Fleet in 1788, is to commence in October.

The complete guide to Paul Hogan
Paul Hogan is known to viewers as the ocker Aussie, but on a recent appearance on Parkinson it was a more philosophical Hogan that appeared – giving his insight into Australian versus British class distinction, snobbery, politics and larrikin humour.  Michael Parkinson’s interviewing style impressed Hogan: “Parkinson’s an excellent interviewer.  He’s got a pretty laid-back style.  That helps.  But it’s the way he really listens to your answers and follows through on them.  To some journos you could answer a question about your wife’s health with ‘I killed her last week,’ and their next question would still be from their notes, ‘Yes, and how many children do you have?’.  Hogan also tells TV Times about his dining habits (“Where do we eat out as a family?  Simple.  The kids want to go wherever it costs a lot!”), wines (“I drink white wines mostly”), money (“It means the same thing to me as it’s always meant.  Freedom.  The right to say no.”), travelling (“At Rome airport I found myself surrounded by about 80 Australian Italians and they all introduced me to their mammas as Luigi.”) and the topic of canned laughter (“Nothing makes me angrier than shows like Donny And Marie.  A line that should get a giggle gets a belly laugh, a roar.  That’s not real.  We’ve been accused of using laugh machines.  We don’t, except for editing purposes to bridge or integrate something.  We’ve edited more laughs out than in.”) 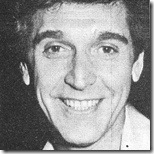 Don Lane’s US debut a secret
Viewers of The Don Lane Show in the near future may notice a subtle change in the program as it prepares to be taped for a proposed US TV special.  Producer Peter Faiman said the upcoming special episode will not be significantly different to routine shows but it will be seen to be less parochial.

All grown up!
After more than 15 years playing the parts of schoolgirls and teenagers, former Bellbird and Alvin Purple star Anne Pendlebury has finally been cast as a middle-aged mother in ABC’s Twenty Good Years.   “I’ve been happy the way things have been, but this role is the highlight of my career so far and I’m happy to play an older woman.”

Briefly…
Stuart Wagstaff and Noeline Brown are to play the lead roles in a sitcom being made for the Seven Network by RS Productions (producers of The Naked Vicar Show).   The program has the working title of Two-Up and is expected to go into production next month.

Production of the Seven Network’s Young Ramsay is continuing despite its failure to gain approval for a ‘C’ classification for airing in the 4.00pm-5.00pm timeslot. 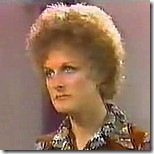 Former The Box actress Judy Nunn (pictured) is returning to the ATV0 studios to appear in an upcoming role in Prisoner.

Three years after joining Young Talent Time, team member Debbie Hancock has decided to leave the show to become a teacher after being offered a job with a modelling agency and school.

Viewpoint: Letters to the Editor
”I wonder if any other viewers are as besotted as I am with Doctor Who’s helpmate K9?  I look out for him in every episode.” M. Bennett, NSW.

“I have recently noticed that no horror movies are being screened at all.  I do think many people would appreciate at least one horror movie a week, preferably on a Friday night.” M. McEachern, SA.

“I agree with J. Lewis (Viewpoint, 12 May 1979), and wonder if ATN7 Sydney knows how much CBN8 (Orange) and CWN6 (Dubbo) mutilates the Seven Big League program.  I am fortunate in that I am able to receive the League replay two nights later than Orange and it is 200 per cent better than CBN8’s version.  RVN2 (Wagga Wagga) gives League fans 60 minutes of football compared to CBN8’s 35 minutes.” J. Holland, NSW.  (TV Times responds: “A CBN8 spokesman said he had discussed the question with RVN2 and that both stations used the natural breaks already inserted by ATN7.  They both allot the same time to commercials, not adding to the breaks provided by Sydney.”)

What’s On (June 23-29):
On Saturday night and into early Sunday, ATV0 airs live coverage from the UK of the final of the Prudential Cup cricket.  Also late on Saturday and Sunday nights, GTV9 screens delayed highlights of the US Open golf championships that were shown live on ABC last weekend.

This Week Has Seven Days (HSV7, Saturday) visits DPTV10, a closed-circuit TV station broadcasting to 5000 viewers in the community of Debney Park.

This Fabulous Century (HSV7, Sunday) looks at the portrayal and role of women in Australia’s history.

In The Wild With Harry Butler (ABC, Wednesday) goes to Tasmania as Butler shows the impact of man on the Tasmanian wilderness and the animals that inhabit its wild, wet terrain.

Maurie Fields, Val Jellay and Smacka Fitzgibbon are some of the guests featured this week on Peter Couchman Tonight (ATV0, weeknights).