Wishing on a star TV Times asked six TV stars to nominate the secret role they’d most love to play.  Victoria Nicolls (The Restless Years) said she would love to do musical comedy roles.  “And if they were making The Ann Miller Story, I’d be desperate to play her.”  Michael Beecher (The Young Doctors) nominated …

END_OF_DOCUMENT_TOKEN_TO_BE_REPLACED 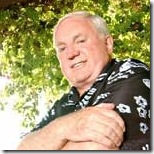 John Michael Howson (pictured) and actor Joe Hasham are two of the over 550 Australians to be acknowledged in this year’s Queen’s Birthday Honours list. Howson started his career as a newspaper cadet journalist before becoming a writer for Melbourne’s ATV0 in 1964, contributing to The Ray Taylor Show and co-writer and performer (as Clown) …