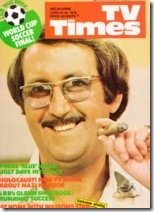 Cover: Ugly Dave hits back
Blankety Blanks panelist Ugly Dave Gray (pictured) answers his critics that say his jokes on the popular game show are too smutty. “I’m not saying we’re perfect, we do get a bit naughty at times, but it’s harmless. We don’t try to shock or offend people,” he tells TV Times. “I honestly don’t think Blankety Blanks is rude. At the most it could be called cheeky. I don’t think any kid would be hurt by watching Blankety Blanks, I strongly believe one of the reasons for its season is that has a double appeal – kids enjoy the atmosphere and the fun, which often gets a bit slapstick, and the adults like it because they can relate to the people that work on show.” The game show, with host Graham Kennedy, is approaching its 400th episode.

ABC boosts drama
TV Times reports that ABC is to boost its amount of drama output by 16 hours to exceed 100 hours of TV a year. As well as series such as Catspaw, Truckies and Patrol Boat, the national broadcaster is looking to add more one-off productions and short-run dramas. Two new series, The Oracle and Ride On Stranger, are already in production, and ABC is hoping to add a science-fiction series Locusts And Wild Honey, and a children’s drama All The Green Years.

Broadening Horizons
ABC’s afternoon rural affairs program Horizon-5 promises to offer an alternative to daytime soaps and variety shows like The Mike Walsh Show. The program is into its third year and as well as covering rural issues, Canberra-based reporter Stewart McLennan says the show is gaining a following in capital cities as well. McLennan and a camera crew have also just completed a trip to Western Australia to film a six-part special report on success stories and farming innovations within the state which he says would be of interest to eastern states audiences.

Now it’s the Doctors Down Under
The Seven Network has finalised plans to produce an Australian version of the British Doctor comedies. The thirteen-part series, titled Doctor Down Under, will be taped later in the year at the studios of ATN7 Sydney and will feature Robin Nedwell and Geoffrey Davies from the British original. The network is also in advanced stages of planning a further seven episodes of the Australian version of Father Dear Father, and is also planning a local remake of Love Thy Neighbour. 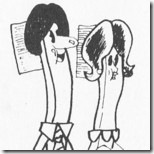 Toothy smiles home at last
In the 1960s, Australian writer Marcia Hatfield had created a cartoon series concept titled The Toothbrush Family – but could not gain any local interest in the proposal. She instead took the idea to America’s CBS network which, in 1976, signed up a multi-million-dollar deal to produce a 20-episode cartoon series as well as merchandising of dental-care products and syndicated comic strips. The success of the program, seen in up to 3 million American households, led to Hatfield being invited to be a guest speaker at the World Health Organisation. The series, which aims to educate children on dental care with characters such as Tom and Tess Toothbrush (pictured), Flash Fluoride, Nev Nailbrush and Susie Sponge, has now been sold back to Australia and is to screen as part of the Super Flying Fun Show on the Nine Network.

Viewpoint: Letters to the Editor
“I have watched Peter Couchman since he was on This Day Tonight. I used to like him very much, but what has ATV0 done to him lately? He used to have the features of a young male, vital, passionate, enthusiastic, with strong opinions. Now he wears make-up which softens his features. He seems insecure, an old lady’s sweetie, and soon will begin to talk like Johnny Young!” F. Ross, VIC.

“May I congratulate the networks for their wisdom in showing American mini-series such as Captains And Kings, Rich Man Poor Man, Roots, 79 Park Avenue and Testimony Of Two Men. The series made compelling viewing, and really brighten up an otherwise dull six to eight hours of viewing.” L. McKenzie, SA.

“I wish to voice my disapproval at the way in which Crawford Productions wrote Maggie Dence out of The Sullivans. For Aunty Rose to drown was a tragedy indeed. Surely, her part could have been disposed of in a more acceptable way than to have her die in such a manner? Even John has a chance of returning to the scene at a future date. Why not Rose?” Y. Johnson, QLD.

What’s On (June 24-30):
As the World Cup reaches its conclusion, ABC screens a live telecast of the playoff for third place, at 3.45am Sunday morning, and the following morning at 3.15am presents live coverage of the World Cup final from Buenos Aires, Argentina. The final is replayed on Monday evening.

HSV7 presents the premiere of the landmark US mini-series Holocaust, reliving the nightmare of the Nazi regime which claimed more than six million lives. The series, which included a cast of 150 actors and 1000 extras, avoided employing Hollywood actors but rather chose performers from stage backgrounds such as Meryl Streep, Rosemary Harris and George Rose. Starting with a three-hour premiere on Monday night, the mini-series continued in two-hour episodes on Tuesday and Wednesday nights, and a two-and-a-half-hour final chapter on Thursday.

Sunday night’s movies are The Oregon Trail (HSV7), The Fortune (GTV9) and Burn (ATV0). GTV9 follows its movie with coverage of the US Open Golf Championships.