It must be awards season… 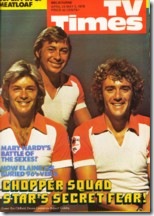 Chopper Squad star’s secret fear!
Dennis Grosvenor, one of the lead actors in the new 0-10 Network series Chopper Squad, reveals one of the occupational hazards in filming the action drama – motion sickness! “I generally manage to control it fairly well by making sure I haven’t eaten too much before a flying or boating scene,” he told TV Times. The series, produced by Reg Grundy Productions, has been sold to Paramount Pictures Television for overseas distribution. (Pictured on the TV Times cover are Grosvenor (centre) with co-stars Eric Oldfield (left) and Robert Coleby.) 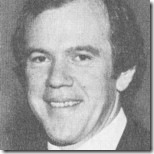 A re-shuffle by the Nine Network will now see a revived battle in the 7.00pm weeknight timeslot, with the network’s moving of popular drama The Sullivans up against Seven‘s current affairs program Willesee At Seven and the 0-10 Network‘s Blankety Blanks. The removal of Nine’s former ratings flagship A Current Affair from 7.00pm marks a victory for Seven, but host Mike Willesee (pictured) is not about to be complacent as The Sullivans is a big-budget series and has had considerable success in its previous slot of 7.30pm. The challenge for The Sullivans, though, is to maintain viewers’ interest as it moves from a twice-weekly one-hour format to nightly half-hour episodes. 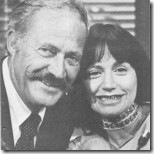 She’s a blooming Hardy perennial
Melbourne’s Mary Hardy concedes that life in television isn’t as easy when you’re a woman. While Graham Kennedy has his ‘palace’ wherever he goes, and Bert Newton and Don Lane at least have private caravans – Hardy (pictured with overseas guest Dan Rowan on a recent Penthouse ’78), even after seven years as host of The Penthouse Club, still has no office, no secretary or even a changing room to herself: “I couldn’t give a —- about the trappings, but it also involves consideration and how you are regarded. If a man asks loudly for a chair, someone will race off and get it. If I ask someone to run a broom around the set I’m being a difficult bitch.” But apart from her public persona on TV and radio, Hardy credits herself as being ‘Australia’s most fanatical fan’, jetting around the world to places like London, New York and Los Angeles to see stage productions whenever her schedule allows it.

Versatility is the name of Donovan’s game
Despite his lowered profile in the long-running TV – Make It Australia campaign, aimed at increasing local content on Australian TV, actor Terry Donovan is still just as concerned at the state of the local industry, “I don’t think Australian TV has progressed much in the last few years, and it’s a great shame. We’ve just got more soap operas instead of good dramas, and although the TV stations maintain they’ve tried, they’ve improved the quantity of shows – not the quality.” Probably not surprisingly, Donovan’s latest roles have been in the theatre and movies such as the South Australian production The Money Movers.

Viewpoint: Letters to the Editor: 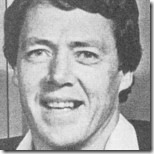 “For some time I have watched and enjoyed $30,000 Treasure Hunt (0-10 Network) but I feel there is cause for complaint against the pronunciations used by the quizmasters. I shudder each time Mike Minehan (pictured) says “twenny” and that he is unable to say simple words like grown, shown, etc., without adding another letter and making them “growan” and “showan”. Surely it is possible to find the correct pronunciation before going to air.” E. Fitzpatrick, VIC.

“After all the complaints about sport on TV you would think something would be done. But we still get sport all day Saturday and Sunday. In North Queensland we only have two channels. On the weekend, the commercial station doesn’t start until 4.00pm and ABC has sport all afternoon, so we have no choice.” S. Alby, QLD.

“Every week I spend 40 cents buying a TV magazine just to know the programs beforehand. However, last Saturday, TEN10 changed the program and instead of showing The Egyptian, they showed City Beneath The Sea, without any regard to the viewer. I took a day off work to see the movie and I ended up like a fool seeing what I had no interest in at all!” Name and address supplied. (TV Times‘ response: “Bad luck. By the way we’ve taken your name off your letter just incase you’re not self-employed and your boss isn’t a movie fan!”)

What’s On (April 29-May 5):
HSV7 presents a 90-minute special Bob Hope In Australia, a variety special taped before an audience of 8000 at Perth’s Entertainment Centre on his recent Australian tour. Also featured in the program are Barbara Eden, Florence Henderson, Kamahl and The Four Kinsmen. The program, produced by Perth’s TVW7, is screened around Australia on the Seven Network and in the United States through NBC.

ABV2 screens a BBC documentary The Dawn Of A Solar Age, which examines the potential developments in the use of solar energy and the feasibility of its widespread use.

The Young Doctors promises a cliff-hanger: “Dennis (Chris King) has trouble getting some money he is owed. Somebody else is in bigger trouble stepping into lifts that aren’t there,” hints Friday’s TV listings, to what became a famous incident where Sister Grace Scott (Cornelia Frances), distracted after delivering a stern warning to one of her nurses, walks into an opened lift shaft.