Angel’s little devil In Home And Away, Shane’s (Dieter Brummer) realisation that former street kid Angel (Melissa George) had a baby at the age of 14 has led the couple on a journey to find the three-year-old child that was taken away from her. “Angel has always wanted to go back and see her child, …

END_OF_DOCUMENT_TOKEN_TO_BE_REPLACED Cover: Jennie Garth (Beverly Hills 90210) The long goodbyes A Country Practice star Judith McGrath has been farewelled by her fellow castmates who presented her with a cake in the studio after she taped her last scenes. Her departure from the series has been well timed, with news from producer JNP that the series will …

END_OF_DOCUMENT_TOKEN_TO_BE_REPLACED 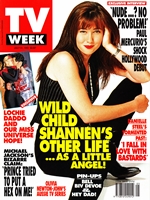 Cover: Shannen Doherty (Beverly Hills 90210) Olivia’s idea of paradise Olivia Newton-John is set to host her own show. The secret project is described as being focused on the environment. “Olivia is very passionate about the environment, children and animals, and this show embraces all of that,” producer Scott Young told TV Week. Young is …

END_OF_DOCUMENT_TOKEN_TO_BE_REPLACED Summer Bay’s hot teen lovers Despite their on screen bickering Home And Away‘s Angel and Shane (Melissa George and Dieter Brummer, pictured) are headed for romance. But the thought of kissing on camera doesn’t look like upsetting the young stars.  Brummer, 17, just shrugs it off as part of the job. “You muck around and there’s …