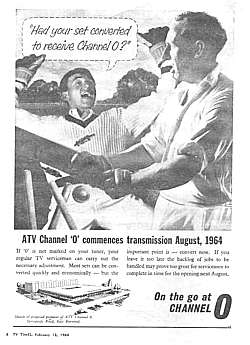 Older TV sets had to be re-tuned to receive the new channel 0 frequency (Picture: TV Times, 1964)

After months of test transmissions, Melbourne’s ATV Channel 0 made its official debut at 6.30pm Saturday 1 August 1964 with an opening preview by newsreader Barry McQueen and children’s presenter Nancy Cato. The first live production, This Is It! followed at 7.00pm hosted by Ray Taylor, who would go on to host ATV0’s regular Saturday night talk show.

Sydney’s TEN10, arrived on 5 April 1965 with the opening night highlighted by the lavish TV special TV Spells Magic, a musical extravaganza tracing the building of a television station.

TVQ0 Brisbane followed in 1 July 1965, and SAS10 Adelaide on 26 July 1965.  Prior to their launch, the four stations formed the Independent Television System (ITS), which was shortly changed to the 0-10 Network. (The new Perth station, STW9, stayed independent of network affiliation until joining the Nine Network in the late 1970’s)

The 0-10 Network mostly lagged third in the ratings, particularly in Melbourne and Brisbane where it had to encourage viewers to convert older TV sets and aerials to receive the new ‘0’ frequency, which was at the low end of the VHF band. 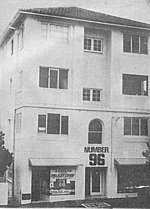 In 1975 0-10, along with the other networks, converted to full-time colour transmission, although ATV0 produced the first colour program on Australian TV as early as 1967.

During the Seventies, TEN10 and ATV0 launched the network’s first one-hour news services. Popular newsreader Katrina Lee joined the TEN10 news desk in 1978.  A young reporter by the name of Jana Wendt made her TV debut on ATV0’s Eyewitness News in 1979, becoming newsreader alongside David Johnston in 1980, before moving to Nine’s 60 Minutes in 1982.

0-10 also scored a coup in 1978 when it secured the rights to televise the Melbourne Cup.  The following year, media tycoon Rupert Murdoch takes control of TEN10 Sydney, while his purchase of Ansett Transport Industries — owner of ATV0 Melbourne — sparked a lengthy government review into media ownership. It was 1981 before Murdoch was given the all-clear to take control of ATV.

Falling ratings, increased reception problems across Melbourne and management fears over the negative connotations of the channel number ‘0’, prompted ATV0 to change frequency to ATV10 on 20 January 1980. The 0-10 Network became Network Ten, despite the Brisbane station continuing as TVQ0. 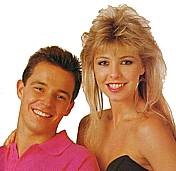 Despite some ratings disasters in the early Eighties,  the decade saw Network Ten perform very strongly, particularly in the years it had the Olympic Games coverage (the opening ceremony of the 1984 Los Angeles Olympics, telecast live to Australia on a Saturday morning, rated 56).

In 1985, Ten took a gamble and resurrected the axed Seven Network soap Neighbours. The revamped series became an instant hit in Australia and overseas and is now the longest running drama on Australian TV.

With Neighbours and other successes like Perfect Match, Return To Eden, Prisoner, The Comedy Company, Good Morning Australia, Eyewitness News, the major blockbuster movies of the time and the big-budget Kennedy-Miller mini-series such as The Dismissal, Bodyline, Vietnam and Bangkok Hilton, Ten became a strong force against the top-rating Nine Network.

In 1987, all three commercial networks changed ownership with ATV10 and TEN10 under the ownership of Frank Lowy’s Westfield Corporation. TVQ0 Brisbane was sold to regional TV operator Darling Downs TV.  Perth businessman Kerry Stokes took control of NEW10 Perth, Capital Television (the Ten affiliate in Canberra), and the Seven Network station in Adelaide, ADS7.  To bring all three stations under the Ten Network, in a unique swap, ADS7 swapped frequencies with SAS10 and changed affiliation from Seven to Ten. 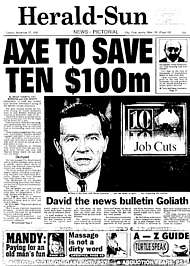 By 1989 things were not looking so good with declining ratings and new shows like Roseanne, thirtysomething and E Street not rating as well as hoped.  American TV executive Bob Shanks was brought in to turn the network around. His attempt to relaunch Ten as 10 TV Australia in July 1989 did little to help Ten’s fortunes with the network soon going into receivership.

Former Nine Network chief Gary Rice then took charge of Network Ten and started reviving the network that was losing $2 million a week.  Rice relaunched Ten with a new logo and a new slogan, The Entertainment Network, in 1991.

In 1992, Westpac Bank bought Ten out of receivership and later sold the network to a consortium headed by Canadian group CanWest.

During the Nineties, Ten fought back with a programming strategy aimed towards the 16-39 age group and providing alternatives such as the 5pm Ten News. The network soon became an extremely profitable operation with strong shares of the desired 16-39 demographic.

Popular shows of the decade have included imported shows like The Simpsons, The X Files, The Nanny, Seinfeld, Beverly Hills 90210 and Melrose Place.  Also featured during the decade were local shows Good Morning Australia, Healthy Wealthy and Wise, Heartbreak High, Jeopardy, State Coroner, The Panel, Sex/Life, Medivac, Big Sky and the popular 1998 mini-series Day Of The Roses. High ratings were also achieved with the 1994 Commonwealth Games and the Melbourne Cup telecasts (which continued to 2002).

Digital Television began test transmissions on Ten in January 2000 and Ten Digital officially launched on 1 January 2001, providing benefits such as widescreen and high definition programming, and the potential for multi-view broadcast of sporting events.  In 2007, Ten launched high-definition channel Ten HD, then replaced in 2009 by One HD, and entertainment channel Eleven launched in 2011.

Since 2001, Ten has had a focus on big-ticket reality show franchises, leading with Big Brother (2001-2008) and later followed by Australian Idol, The Biggest Loser, So You Think You Can Dance? and re-wrote the ratings record books with MasterChef Australia.

In 2002, Ten entered into a five-year partnership with Nine and Foxtel to broadcast the Australian Football League.  From 2007, Ten re-aligned with Seven and Foxtel for the next five-year deal before walking away from AFL at the end of 2011.

While Neighbours has continued, Ten has invested in other drama series and telemovies including The Secret Life Of Us, White Collar Blue, Small Claims, Blackjack, The Society Murders, Jessica, Rush, Offspring and Bikie Wars: Brothers In Arms.

The network has also continued Australian-produced light entertainment in the last decade, including Ready Steady Cook, Thank God You’re Here, The Circle, Before The Game and Talkin’ ’bout Your Generation. Since 2009 The 7PM Project (later re-named The Project) aimed to combine news with entertainment.

However, Ten’s longest running program is the Sunday morning Mass For You At Home, which began production at ATV0 in 1971 and continues in production today.

Permanent link to this article: https://televisionau.com/feature-articles/network-ten