Born in Adelaide, she first became ill with Hodgkin’s Lymphoma at the age of 17. The diagnosis led to her re-evaluating her interests and changed her studies from law to studying English, Literature and Drama at Flinders University. 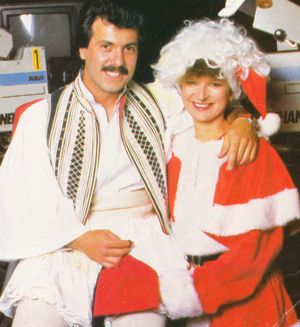 She became a drama teacher in Adelaide and featured in a short film, Letters From Poland, with Martin Vaughan.

By 1980 she made the move to Sydney and became one of the first presenters on the new multicultural Channel 0/28 (now SBS), and later became host of pop music shows Rock Around The World and Continental Drift.

She then moved to the Ten Network as a host of Music Video and showbiz reporter for Good Morning Australia. She later reported for the Seven Network‘s Eleven AM before returning to SBS to host The Big Byte.

Over the last two decades, she has worked as a television writer and producer, with credits including the long-running factual series RBT.

She has also published two books: Jesse’s World, inspired by her experiences as an adoptive parent, and Shimmer, based on her mother’s life.

In 2019 she was awarded a Distinguished Alumni Award from Flinders University for her significant contribution to the creative arts as a television producer and presenter, author and movie reviewer.

The lymphona she suffered as a teenager returned last year. She passed away peacefully on the weekend, surrounded by family.

Basia Rendall is survived by her husband, director Kimble Rendall, and children William and Camille.