The success of Australian-produced mini-series in the late 1970s saw the genre continue into the 1980s — with period dramas like The Last Outlaw, Outbreak Of Love, Water Under The Bridge, A Town Like Alice, 1915, Women Of The Sun and Sara Dane clocking up big budgets and, in many cases, overseas sales.

ABC‘s contribution to the genre in 1980 was the eight-part series The Timeless Land, based on the trilogy of novels by Eleanor Dark. The series promised “a realistic and earthy look at the early convict days of our country, when flogging, prostitution, starvation and murder were facts of life”, during the years 1788 to 1810. 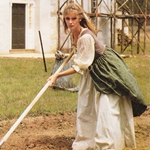 The Timeless Land is said to have cost ABC around $1.5 million — a substantial sum for a production in 1980 — but the cost was off-set by an international rights deal with Paramount Pictures worth $1 million. The premiere of The Timeless Land is among the latest additions to Classic TV Guides:

Permanent link to this article: https://televisionau.com/2022/09/classic-tv-guides-the-timeless-land.html