It is 30 years since Media Watch made its debut on ABC. 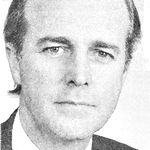 The first episode, broadcast on 8 May 1989, packed a lot into its quarter hour episode. It reviewed media coverage of the release from a Thai prison of rugby league star Paul Hayward; the reporting by Sydney media into the shooting death of an Aboriginal man by police; the media’s favourable coverage of candidate, former illegal gambling boss Gerry Bellino in an upcoming Brisbane by-election; an interview with Brisbane’s Courier-Mail editor, Greg Chamberlin; and the upcoming launch of an Australian re-print of salacious UK newspaper Sunday Sport.

Initially hosted by Stuart Littlemore, a former This Day Tonight and Four Corners journalist, Media Watch sought to analyse the strengths and failings of journalism in this country, while also showing some of the  gaffes in media reporting. Although each episode only fills 15 minutes, it’s a very labour intensive format in terms of research.

Littlemore left the program in 1997, to be replaced by Radio National host Richard Ackland. Other hosts of the program over the years include David Marr, Liz Jackson, Monica Attard, Jonathan Holmes and — currently into his third stint — Paul Barry. All hosts have come through the ranks of ABC one way or another.

One of the biggest stories to break from Media Watch was in 1999, of what was to become the “cash for comment” affair — where high profile radio hosts Alan Jones and John Laws were revealed to be accepting undeclared payments in return for positive commentary on major corporations such as Qantas, Optus, Foxtel and the banks.

Media Watch was axed in 2000 under the ABC’s managing director Jonathan Shier, who was openly critical of the program.

After Shier himself left the ABC a year later, Media Watch was reinstated and has continued to fill the post-Four Corners timeslot on Monday nights ever since.

Since 2017, Media Watch has also had an online spin-off, Media Bites, presenting a shorter, sharper analysis of the media for a more social media-savvy crowd.

Permanent link to this article: https://televisionau.com/2019/05/the-first-media-watch.html