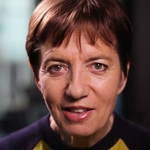 Former ABC journalist and presenter Liz Jackson has died at the age of 67.

The award-winning journalist was diagnosed with Parkinson’s disease in 2014. She later documented her battle with the illness in A Sense Of Self, which aired on ABC in November 2016 and earned her a Walkley Award last year.

She was with her husband Martin Butler on holiday in Greece when she passed away peacefully in her sleep.

Jackson joined ABC radio in 1986 and moved to television in 1993 to Four Corners, including a stint as host. She also hosted Media Watch in 2005. As well as nine Walkley Awards, including a Gold Walkley in 2006, she also won three TV Week Logie Awards for outstanding journalism.

Jackson resigned from ABC in 2013, intending “to getting fit and healthy in my new stress-free existence. But it wasn’t to be.” The Parkinson’s diagnosis followed eighteen months later.

ABC managing director Michelle Guthrie paid tribute to Jackson: “Liz Jackson was one of the greats of the ABC, an incredible journalist who inspired all around her and who Australians turned to with complete trust. Her work has informed and shaped this country. Her enormous talent, fearless integrity and unflinching courage will serve as a beacon for many generations of journalists and storytellers to come.”

Liz Jackson is survived by her husband and two children.

Permanent link to this article: https://televisionau.com/2018/06/obituary-liz-jackson.html