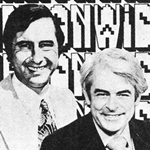 Nineteen Seventy-Nine marked something of a shift in current affairs on television. The Eighties was approaching and something different was going to be needed to help us keep up with the modern decade.

Both ABC and Nine had just axed their long-running nightly current affairs programs This Day Tonight and A Current Affair respectively.

The new year brought a shift with Nine launching its multi-million dollar investment 60 Minutes as its new flagship current affairs brand, and ABC replacing TDT with a new program, Nationwide.

Nationwide also was given a later timeslot, 9.30pm compared to TDT‘s 7.30pm. The later timeslot would allow a more in depth analysis of the day’s news and events and a slightly longer running time of 40 minutes.

The new show was also unique in that it comprised a national segment, hosted by Clive Hale in Sydney, with the second half of the show devoted to local coverage presented by hosts in each state. The format allowed enough flexibility so that if there was a big national story on the day that it could take precedence over the local segments if required.

Some of the names to report or present for the show over the following years included Sonia Humphrey, Mary Delahunty, Geraldine Doogue, Richard Morecroft and Peter Couchman.

Criticism that the 9.30pm timeslot was too late to be digesting the heavy news of the day led to ABC in 1981 shifting the show’s timeslot to around 8.30pm — although given the fluidity of ABC’s schedule, some nights it might appear as early as 8.10pm or other nights as late at 9pm, which probably did it very few favours.

With news audiences for ABC going into decline, an overall review of ABC’s news and current affairs output in mid-1984 ultimately put an end to the long-running Weekend Magazine, the locally-based 7.00pm ABC News, regional news bulletins across the country and Nationwide. Nationwide presented its final edition on 7 December 1984.

Replacing ABC News and Nationwide the following year was The National, a combined news and current affairs program that did little to arrest the decline in ABC’s news ratings. Permanent link to this article: https://televisionau.com/2019/02/nationwide-running-towards-the-80s.html