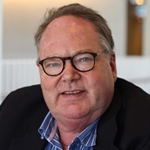 Mark Colvin, ABC journalist across radio and television, has died in a Sydney hospital at the age of 65.

English-born Colvin came to Australia as a 21-year-old and joined ABC as a cadet journalist in 1974.

His work was mostly in radio, including the early years of 2JJ (now Triple J) and current affairs programs The World Today and, for many years, PM.

In 1979 he moved to television as one of the founding reporters for current affairs program Nationwide.

He later served as a reporter for Four Corners for four years and then was appointed London current affairs correspondent, reporting for programs including The 7.30 Report, Lateline and Foreign Correspondent.

In a statement issued earlier today, ABC managing director Michelle Guthrie paid tribute to Colvin: “For many Australians, Mark’s steady and measured voice as host of PM brought them the essential news of the day and kept them informed about events of national and international importance.

“We will miss him enormously, and extend our thoughts to his family and friends.”

ABC Director, News Gaven Morris said: “Mark was one of Australia’s finest journalists. He leaves an unfillable void as a journalist, a colleague and a friend.

“He was an important part of the ABC community as a mentor and teacher to young reporters and as a voice of wisdom and experience to many older ones. Our reporters and producers felt strengthened by his presence in the newsroom and emboldened by the sound of his voice on our airwaves.”

Tributes for Colvin came from many across the wider journalism community and from politics — including Prime Minister Malcolm Turnbull, Opposition Leader Bill Shorten and Minister for Communications, Senator Mitch Fifield,

Mark Colvin is survived by his mother, Anne, his wife Michelle and his two sons, Nicolas and William. Permanent link to this article: https://televisionau.com/2017/05/obituary-mark-colvin.html