Angel’s baby — it’s a girl!
Home And Away‘s newest addition is born in episodes to go to air this week. Angel (Melissa George) gives birth to daughter Shane — named after the baby’s recently-deceased father. Of course, the baby’s birth — already 10 weeks premature — is in dramatic circumstances. Summer Bay is hit by a flood and attempts to get Angel to hospital are hampered by the rising waters. She manages to get to Pippa’s in time to give birth, just as Pippa (Debra Lawrance) receives the news that her husband Michael (Dennis Coard) has died in the flood. “It was all very intense and amazing,” George told TV Week of the episodes. “We had three night shoots in a row until 6am, and it was very exciting, and in the end it came out a masterpiece.” 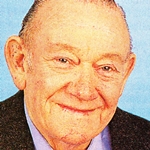 Memories of Maurie
The late Maurie Fields (pictured), who passed away in December 1995, is to be inducted into the TV Week Logie Awards Hall Of Fame. Fields, whose wife Val Jellay will accept his award, had a showbusiness career dating back over 50 years and appeared on television from its very early days. A performer on variety show Sunnyside Up, Fields later moved into acting, with credits including Hunter, Homicide, Bellbird, Division 4, Matlock Police, The Sullivans, Bobby Dazzler, A Town Like Alice, Skyways, Prisoner and Neighbours. He starred alongside Jellay in the long-running series The Flying Doctors. Since Fields’ sudden passing, Jellay has been overwhelmed by the public response. “The overseas fan clubs — particularly the European ones (where The Flying Doctors was a hit) — are still writing. And the number of cards and flowers that have arrived is just amazing,” she told TV Week.

Logies online!
The 38th annual TV Week Logie Awards is going online! The website, designed and hosted by Melbourne-based company InfoWeb, is best viewed on the Netscape 2.0 browser using either Windows 95 or Windows NT. The website features photos and information about all the nominees for the upcoming Logies presentation, plus a Logies history and a sneak peek at this year’s telecast. Java technology has also been used to build an interactive game, with successful players entered into the draw to win a personal home page and a 12-month subscription to TV Week. 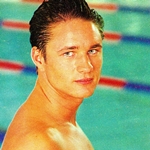 Susie makes Martin sweat!
Swimming champion Susie O’Neill has taken some time out of her pre-Olympics training schedule to offer some tips to actor Martin Henderson (pictured), who is playing the part of swimmer Tom Nash in the new Network Ten series Sweat. “He looks pretty good,” she told TV Week. “But his butterfly needs a bit of work.” The 13-part series debuts on Network Ten this week. “The timing is perfect with the Olympics coming up,” Henderson told TV Week. “I learned a lot about the lives of athletes. My character’s life is based on winning, but often his relationships suffer as a result.”

Program Highlights (Melbourne, April 20-26):
Saturday: In the series debut of Sweat (6.30pm, Ten), swimmer Tom Nash (Martin Henderson) has to face the reality of losing a race because he was over-confident, while also contending with his budding relationship with gymnast Tats (Inge Hornstra). Monday: In Neighbours (6.30pm, Ten), Karl (Alan Fletcher) tries to come to terms with the fact that Tom (Bob Hornery) is not his real father; while Andrew (Christopher Uhlmann) confides with Susan (Jackie Woodburne) about his relationship with another man. In Water Rats (7.30pm, Nine), the woman whose boyfriend was shot dead by Rachel Goldstein (Catherine McClements) is released from jail on parole and keeps turning up wherever Goldie happens to be.

Tuesday: In The Great Outdoors (8pm, Seven), Frankie J Holden enjoys the quiet pleasures of a Perth wine tasting cruise about the ship Mystique. In GP (8.30pm, ABC), a school teacher is accused of having a sexual relationship with a ten-year-old student. 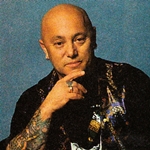