Melrose on the Gold Coast
The Nine Network‘s new drama series Pacific Drive has been in production for three months and is set to debut next month in a post-9.30pm timeslot. The show’s publicity blurb promises that Pacific Drive is “a place settled between endless golden beaches and a cosmopolitan city, where money buys everything but peace of mind … a place where both the rich and beautiful live, work and play, providing the ultimate backdrop for the ambitions, desires and obsessions of people who live there”. Pacific Drive is set to takes viewers into the boardroom of a glamorous image-making empire; inside the bedrooms of its dynamic residents; and on one of the world’s most beautiful beaches. Cast (pictured above) and producers make no apologies for any similarities between Pacific Drive and the US hit Melrose Place. “It’s probably Melrose crossed with something,” producer Bruce Best told TV Week. “The physical production itself is definitely groundbreaking. It’s not vulgar, there’s no gratuitous sex, but you see enough bodies to make it interesting. Let’s face it, you don’t need a PhD to watch it, but it’s good fun none the less.” Pacific Drive features former E Street stars Kate Raison, Melissa Tkautz and Adrian Lee. Joining them are Erik Thomson, Simone Buchanan, Danielle Spencer, Joss McWilliam, Lloyd Morris, Christine Stephen-Daly, Andre Eikmeier, Mark Constable, Steve J Harman, Libby Tanner and Darrin Klimek. 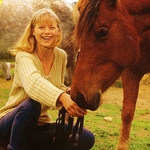 Riding off into the sunset
Australia’s Funniest Home Video Show host Jo Beth Taylor (pictured) and her husband James have joined with eight other investors in purchasing a historic 500-hectare property on the northern NSW coast. They are set to turn the property into a horse-riding resort. Taylor’s interest in horses was triggered by a segment she filmed for Getaway two years ago. “It was a report on pub crawls on horseback and we met the tour operator,” she told TV Week. “The Getaway story changed my life.”

“They say that death is hard, but comedy is harder. Perhaps the person who coined this phrase was contemplating the failure of the Australian television industry to produce a decent sitcom. With the exception of Mother And Son and Frontline, our recent efforts to construct a sitcom with artistic and commercial appeal have ranged from mediocre to abysmal. Shows such as Late For School, Hampton Court, The Bob Morrison Show, Bligh, Over The Hill, Wedlocked and Funky Squad have fizzled like wet sparklers. Given the limited financial resources available to Australian producers, it’s probably unfair to judge our shows alongside the likes of Seinfeld and Roseanne. While Roseanne has a budget of close to $1 million an episode, the average cost of a half-hour Australian sitcom is in the vicinity of $140,000.”

Monday: With Christmas rapidly approaching, Seven’s midday movies this week all take on a Christmas theme, starting with the 1978 film A Christmas To Remember (12pm).

Tuesday: The Benson And Hedges World Series Cricket (2.20pm, Nine) is live from Melbourne, with only two hours of coverage allowed into Melbourne. Wise Up (9.30pm, ABC) discusses the topic of Abortion.

Wednesday: In Law Of The Land (7.30pm, Nine), one of the town’s own police officers is knifed in a bungled raid. The biographical series A Life (9.30pm, ABC) returns — this week profiling RM Williams, the outback horseman who created an iconic clothing brand.