End of an affair?
He’s been in television for 30 years, won four Gold Logies and is topping the ratings with A Current Affair and his own series of celebrity interview specials, but Ray Martin has given his first indication that it might be time to reassess his work commitments. “I need to mix ACA with the specials, but that’s the problem. The reason I left 60 Minutes was to stay off the road. Now, I’m on the road. I’ve just had 28 days without a day off. You’ve got to pull yourself back,” he told TV Week.  “I want to do what I’m doing, but I don’t want to leave home. We’ve got to work that out. I think ACA has to go on the road. That’s what Australians expect. There’s no reason why you should be stick in a studio. The Americans have shown that technically it can be done. It wasn’t (possible) five years ago.” 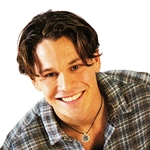 Corey’s the Loving kind
Heartbreak High star Corey Page (pictured) has landed a role in a US daytime soap. The 24-year-old auditioned for a part in ABC series One Life To Live but was considered too young. Producers then created a character for him in ABC’s other daytime soap Loving (not seen in Australia). Although he initially had reservations about working on a soap, Page has taken the view that it is an opportunity to open doors to other projects. “I’m going to kick as much butt as I can while I’m there to prove that I have the ability to do more than just soap,” he told TV Week. “This is a means to an end.” 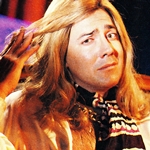 Absolutely Fabio!
Full Frontal comedian Shaun Micallef admits he didn’t have to look far for inspiration to impersonate Italian model Fabio. He took the voice from his dad! “I did model the character’s voice on my dad’s,” Micallef told TV Week. “I have never heard Fabio speak, and my father is Maltese, so I used his accent. I don’t think he’s twigged yet!” The mock Fabio (pictured) appears on Full Frontal in a series of sketches called Fabio’s Love Tips, where the superstar model reveals his guide to living romantically. An upcoming episode will see Fabio wed his girlfriend, played by Daina Reid. “This will be big. Even bigger than Shane and Angel’s wedding on Home And Away,” Micallef said. 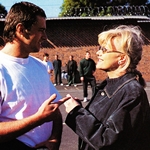 “When television gets on a roll with something, it really becomes a juggernaut. For instance, just in case we didn’t have enough “lifestyle” programs, Network Ten this week introduces two more — a new motoring show, Behind The Wheel, with James Morrison and Monica Trapaga, and Your Money And Your Life, with finance commentator David Koch and his wife and kids. They join a stable already boasting Healthy Wealthy And Wise and Beyond 2000, but not quite as crowded as those at the other commercial networks.”

Program Highlights (Melbourne, May 27-June 2):
Saturday: Beyond 2000 (5.30pm, Ten) reports on a man planning to change the way we communicate; and an oversized wing designed to replace satellites for remote surveillance. AFL Saturday (8.30pm, Seven) crosses live to Adelaide for Adelaide Crows versus Hawthorn. The Rugby World Cup (10.45pm, Ten) includes Wales versus Japan, England versus Argentina, Western Samoa versus Italy and New Zealand versus Ireland.

Sunday: In Heartbreak High (5.30pm, Ten), the Hartley High guys decide they want an official school basketball team; and Rose (Katherine Halliday) brings baby Tess to school as her aunt is sick and the gang help her hide the baby until Deloraine (Stephen O’Rourke) learns about it. Sunday night movies are Body Of Evidence (Seven), The Power Of One (repeat, Nine) and Backdraft (repeat, Ten).

Tuesday: In Neighbours (6.30pm, Ten), Reuben (James Condon) has trouble telling Garnet (Richard Moss) about his medical condition; and Mal (Benjamin McNair) is accused of cheating in an exam. In GP (8.30pm, ABC), a mother is desperate to find a suitable donor kidney for her son. The Rugby World Cup (10.15pm, Ten) covers South Africa versus Romania, Western Samoa versus Argentina, France versus Ivory Coast and Scotland versus Tonga.