Continuing the early history of TEN10, Sydney. Refer also to Part I and Part II.

Leading into the ’80s, TEN10 and the newly-relaunched Network Ten had its hopes stacked on its new soapie — Arcade. 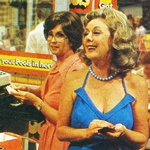 With a $3 million budget, the main studio decked out to portray a shopping mall, an impressive cast of fresh and mature talent (including Peggy Toppano and Lorrae Desmond, pictured), and developed by the creative forces behind Number 96, Arcade promised enormous potential in taking on early evening stalwarts The Sullivans and Willesee At Seven.

The end result, however, was not to match the hype. Following its launch in January 1980, Arcade was panned by the critics and ignored by the viewers. The network pulled the pin on the series after only six weeks on air. Any completed episodes unaired at that point are still, even now, yet to see the light of day.

TEN10’s general manager Brian Morris, a newcomer to the television business having been promoted from Rupert Murdoch‘s magazine empire in Melbourne, said there were lessons learned from Arcade‘s failure. “(the channel) made a mistake by trying to do it ourselves,” he told The Australian Women’s Weekly‘s TV World magazine in 1981. “It was one of the few major programs a commercial channel or network has done itself without employing outside packagers. We weren’t properly equipped to do it.” 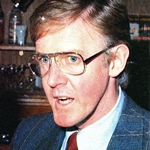 In the wake of Arcade‘s demise, Ten’s next drama project, a prison series titled Punishment, didn’t fare much better. Described as a “male version” of the popular Melbourne-based drama Prisoner — and from the same production company — Punishment (featuring Barry Crocker, pictured, in his first TV dramatic role) failed to gain any interest and its series of 26 episodes was mostly shown out of ratings season.

Moving away from drama, TEN10 also tried its hand at variety. The station’s Saturday Night Live of 1979 made way for the weeknight The John Singleton Show in 1980. An attempt at sketch comedy, Ratbags in 1981, had a short life though some of the cast members and comedy characters soon re-appeared on the more successful ABC series Australia You’re Standing In It. 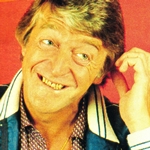 But Ten did score a coup in signing up English interviewer Michael Parkinson (pictured) for an Australian version of his popular BBC interview series, shown in Australia on ABC. The deal was said to have cost Ten $3 million.

Parkinson was also signed up to host the TV Week Logie Awards, which departed from tradition in 1981 — being held in Sydney and for the first time was telecast on Network Ten.

Ten led the revival of breakfast television with Good Morning Australia, launched in early 1981. Initially hosted by Gordon Elliott and Sue Kellaway, Good Morning Australia in that format continued for eleven years and saw the rival Nine Network respond with its own morning show, the program now known as Today. 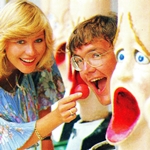 Kellaway was signed up by Nine for its new show. Her replacement at GMA was Kerri-Anne Wright, who went on to become Kerri-Anne Kennerley. She became GMA‘s longest-serving co-host, staying with the show for ten years and outlasting a number of male colleagues — including Elliott, Mike Gibson, Terry Willesee and Tim Webster.

John Laws fronted the afternoon program Beauty And The Beast, revisiting a format made famous by Seven in the 1960s and, bizarrely, at the same time as Seven itself revived the format. Laws later left the program, to be replaced by Clive Robertson, but re-appeared on Ten as host of current affairs program The Reporters.

When Nine’s The Mike Walsh Show was to be replaced by Midday in 1985, Ten saw the opportunity to reclaim the early afternoon timeslot. Good Afternoon Australia, hosted by Gordon Elliott and Katrina Lee, ran over the summer of 1984-85. The program became After Noon in February 1985, and Elliott replaced by Tony Murphy. After Noon only went for a few months, unable to take much away from Midday with new host Ray Martin. 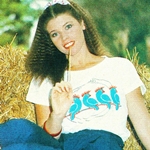 Children’s programs produced at TEN10 during the decade included The Harry And Ralph Show (hosted by Moira McLean, pictured), while Simon Townsend’s Wonder World (which began in 1979) continued through to 1986. Its successors included Off The Dish (co-hosted by a young Cameron Daddo), Ridgey Didge and Double Dare.

Meanwhile, Billy J Smith and Fiona MacDonald hosted the outdoor game show It’s A Knockout. Produced a decade after Almost Anything Goes from Melbourne and which was based on the French program Jeux Sans Frontières, It’s A Knockout was a hit with viewers with its boisterous sporting challenges.

Don Lane had returned to Australia four years after The Don Lane Show was axed by Nine. He hosted You’ve Got To Be Joking, a Candid Camera-type program with practical jokes. The show had a short life but Lane was soon back on screen as host of Ten’s Late Night Australia, a talk and variety show hoping to tackle the popularity of Seven’s Newsworld. Late Night Australia lasted around six months, having also copped opposition from Graham Kennedy‘s return to television at Nine.

With big budget mini-series becoming the flavour of the decade, TEN10 after the failure of Arcade and Punishment took a break from producing serial dramas — while the Melbourne station ATV10 was making Neighbours and Prisoner for the network. After the demise of Prisoner in 1986, TEN10 provided its replacement — a semi-rural drama called Richmond Hill, launched in 1988. From the producers of Neighbours, Richmond Hill was moderately popular but could not escape the axe at the end of its first year.

Richmond Hill was replaced by the grittier inner-city drama E Street in 1989, which would go on for four years.

Good Morning Sydney eventually came to an end in 1988 after ten years. It was replaced by ‘Til Ten, a national program hosted by Joan McInnes. The new show continued for three years.

Despite Rupert Murdoch bursting in and turning the fortunes of the Ten Network around, he saw his future overseas and sought US citizenship to enable him to better crack the American market. Because of that he had to sell TEN10 and ATV10. The stations ended up being sold in 1987 to Frank Lowy‘s Westfield Corporation for $842 million.

Under Lowy ownership, Ten pursued an aggressive purchasing strategy to secure new American programs ahead of rivals Nine and Seven. This was in defiance of a traditional agreement between the three networks to prevent early season bidding for American product, hence keeping costs down. Lowy’s spending spree inevitably bumped prices up.

Ten also threw big money at sporting rights — such as $45 million for three seasons of Sydney rugby league, the Panasonic Cup and State Of Origin — and managed to get some new shows in development, including the expensive current affairs program Page One. TEN10 alone went from a workforce of 700 to around 1000. The station’s fleet of 100 company cars was said to include 33 BMWs. But Lowy’s spending was ill-timed. The stock market crash of 1987 sparked a wake up call to the television business that the big spending days were not to last.

Although Ten ended 1988 as one of its best years ever, ratings took a fall in 1989 as established shows were losing some shine and new titles failed to grab audiences. Ten News was also being hit by a resurgent Seven Nightly News.

The appointment of American TV executive Bob Shanks to boost Ten’s fortunes led to a change in network branding to 10 TV Australia. The July 1989 relaunch was accompanied by a raft of game shows, including Sydney-based Superquiz, a remake of the classic Pick A Box hosted by Mike Walsh (returning to Ten after 12 years), Family Double Dare (hosted by Larry Emdur) and Candid Camera On Australia. Current affairs show Page One was renamed Public Eye, with new host Kerry O’Brien. And E Street was taken back to the drawing board and allowed to be revamped in a bid to boost its struggling ratings.

The rebranding to 10 TV Australia was not a huge success. Most of Shanks’ commissioned projects were gone by the end of the year, and he was soon to return to the US.

Ten’s overall ratings and financial downfall set the pace for a dramatically changed network heading into the 1990s. After Lowy sells Ten off for a bargain price to production house Broadcom, TEN10 would end up moving out of its North Ryde studios to smaller premises in Ultimo, and later Pyrmont.

This concludes the weekend series devoted to celebrating 50 years of TEN Sydney. The links below refer to posts published in 2014, written for the occasion of 50 years of Ten in Melbourne, that go through the progress of Network Ten from 1990 to the present day.