Billy J Smith, the sports commentator best known as co-host of It’s A Knockout in the 1980s, has died at the age of 73.

Smith suffered head injuries following a fall on Tuesday after being at lunch with friends but never regained consciousness. His family made the decision to turn off his life support on Wednesday.

Smith made his TV debut in the 1960s as a host of a local game show, The Numbers Game, but he became more famous as a rugby league commentator in the years to follow. 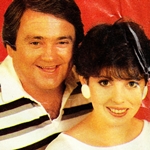 He worked at Brisbane radio stations including 4IP and 4BK during the 1970s, and on television as a rugby commentator and sports presenter at BTQ7 and TVQ0 (later Ten) in Brisbane.

He became a national celebrity as co-host of the game show It’s A Knockout (with Fiona MacDonald, pictured) in the mid-1980s and was a commentator on Ten’s Olympic Games coverage.

Later he hosted a local version of The Footy Show for QTQ9 and wrote a weekly column for the Queensland edition of TV Week.

He hosted Sports Today on Brisbane radio station 4BC and retired from broadcasting ten years ago but continued to work as a corporate host and guest speaker.

Permanent link to this article: https://televisionau.com/2019/02/obituary-billy-j-smith.html