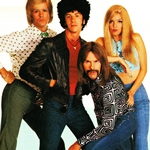 Funky Squad, from the producers of current affairs satire Frontline, made its debut 20 years ago today.

Based on a series of radio sketches, Funky Squad was a parody of the 1970s cop shows that tried to make the genre “cool” by featuring contemporary characters with lots of ’70s lingo, hairstyles and fashion. The pork pie hats of the TV cops of the ’60s had no place here — this was more Mod Squad, Starsky And Hutch and Charlie’s Angels territory.

The team of hip crimefighters were cool and spunky Grant (Tim Ferguson), wisecracking ladies’ man Stix (Santo Cilauro), the enigmatic mute Poncho (Tom Gleisner) and token girl Cassie (Jane Kennedy). Keeping them in check back at police HQ was their boss, referred to only as The Chief (Barry Friedlander).

For seven episodes, Funky Squad solved murders, found missing people, tackled drugs and fought thieves as only the “now” generation could. Like the cop shows of the time, the storytelling was rather formulaic — one-dimensional goodies and baddies, and with each episode usually ending with the crims locked up and the squad assembled for some lighthearted banter and corny jokes before the credits rolled. All of it presented in the style and fashions of the day and in grainy ’70s-style film quality — even the end credits indicate the year “MCMLXXVI” (1976). Just as entertaining as the show itself, Funky Squad also took us back in time by featuring actual TV commercials from that era — promoting the virtues of long-gone brands like RC Cola, Brashs and Uncle Sam — probably the only time we were able to see “commercial breaks” on the ABC!

Amid the various actors to feature in guest roles in the series was a young Anthony Callea — almost a decade before he became a star in Australian Idol. And just like any TV show appealing to youth in the 1970s, Funky Squad had its own annual. Here we got to learn about the characters and the “actors” (the real-life actors had their own mock personas) with lots of style tips and behind the scenes insights. There were some crudely-drawn Funky Squad comic strips, plus lots of ‘cool’ stuff, like tips on how to decorate your bedroom (‘Cover your bedhead with aluminium foil. It catches the light and makes it look just like a bedhead covered in aluminium foil’) or host your own disco party.

Funky Squad may not represent a particularly ground-breaking venture in Australian comedy, but neither was it probably meant to be — appearing as a quirky interlude between two seasons of the more critically-acclaimed Frontline — and it is still an fun look back at a different TV and social era.

Funky Squad was released on DVD in 2007. Permanent link to this article: https://televisionau.com/2015/04/flashback-to-funky-squad.html