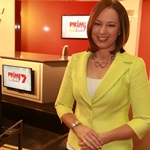 It was the end of an era tonight as Prime7 presented its last news bulletin from its Tamworth studios.

Local reporters will still be working from within the region but from Monday the half-hour bulletin will be presented from Prime7’s studios in Canberra.

Fiona Ferguson (pictured), who has presented the Tamworth-based bulletins for 17 years, will remain in Tamworth as news editor for the network’s NSW North Coast bulletin.

The Tamworth studios for Prime7 were opened just over 50 years ago, when the station originally launched as NEN9. The station premises on Goonoo Goonoo Road are expected to be sold off, with Prime7’s remaining local staff moving to a smaller location. Permanent link to this article: https://televisionau.com/2015/04/prime7-signs-off-from-tamworth-studio.html