On Boxing Day 2004, an earthquake off the Indonesian coast triggered a tsunami that caused massive devastation to a number of countries including Indonesia, Sri Lanka, India, Thailand, the Maldives and Somalia.

Over 200,000 people were killed by the tsunami with many more injured or unaccounted for. Whole towns and villages were decimated.

Two weeks after the tsunami, Australia’s Seven, Nine and Ten networks held a history-making telethon for aid organisation World Vision to raise funds for the relief effort. It was a rare show of unity among rival networks. Ray Martin (A Current Affair) was reporting from Aceh, Indonesia, one of the most significantly devastated regions. There were also live crosses to Christine Spiteri in Sri Lanka and Chris Reason and Ian ‘Molly’ Meldrum in Phuket.

The telecast was broadcast simultaneously across Seven, Nine and Ten networks, radio Triple M and internationally via the ABC‘s Australia Network which broadcast to some of the countries affected by the disaster.

Australia Unites: Reach Out To Asia achieved a total of $20 million in donations and ticket sales.

The video below is the opening segment of the telethon, including introductions from the various presenters:

And some screen captures from the same video and some of the network promotions: 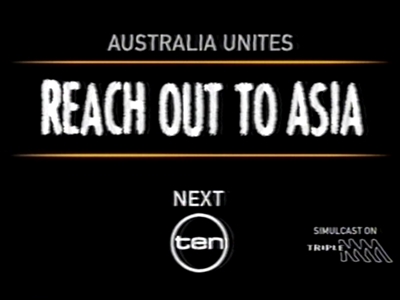 Permanent link to this article: https://televisionau.com/2015/01/ten-years-ago-australia-unites.html