Summer Bay babes slam their critics
Three of the teen stars of Home And Away are not letting the snide remarks and criticism of their jobs get them down. Isla Fisher, who plays Shannon, says: “At 18, we shouldn’t be making this amount of money. We wouldn’t earn this at Macca’s and we wouldn’t earn this after 10 years at uni, so I think we’re doing very well.” Tempany Deckert (Selina) told TV Week, “All of us catch cabs and you go past all these people in their suits and their cars and you think, ‘You’re going to sit in an office all day doing something you probably don’t really like and then go home’. Whereas we go to work and get to talk to heaps of different people.” Melissa George (Angel) said, “I don’t want to look back to Home And Away and say, ‘I don’t believe I did that’, because I’m enjoying it so much now. There’s no reason why I should ever feel ashamed. I think whatever you do, as long as you’re happy, it’s made for you.”

Logies: The event of ’95
This week marks the start of the countdown to the 37th annual TV Week Logie Awards, to be held in April and broadcast on the Seven Network. Bob Campbell, Seven’s managing director, said the Logies will be “a fabulous night, coupled with a mighty ratings success.. the full resources of the network will be thrown behind 1995’s event.” Key details of the Logies, including host, guests and venue, are still to be announced but in the meantime viewers can place their votes for the twelve Most Popular award categories, including the Gold Logie for most popular personality on Australian television, using a coupon from the magazine. 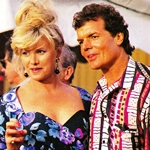 Furness on fire!
Viewers may be in for a shock when they see Deborra-Lee Furness in her latest TV role. With a background of earthy, gutsy and antagonistic roles, plus an upcoming role as a lesbian cop in Halifax fp, she takes on the far more frivolous role of Delores Kennedy in Seven‘s new series Fire. Delores is described as the ‘suburban sexpot’, decked out in pinks, blues, spangles and clashing prints. “When I first had to audition, I said, ‘I’m totally wrong for this part!,” she told TV Week. “It was a little scary for me because it’s such a bold, brash character, and there’s a fine line there. You could really fall on your face with something like this.” Furness (pictured with Fire co-star Andy Anderson) will also appear on TV later this year as the lead in the ABC prison drama, Correlli.

Tim’s all-star rising
Former Doug Anthony Allstar Tim Ferguson is busy filming for Funky Squad, a send-up of Seventies cop shows being produced by the team behind Frontline. Meanwhile, he is also tipped to be host of Nine‘s proposed new game show Don’t Forget Your Toothbrush, a format that’s been a hit in the UK.

“Welcome again to the TV Week Logie Awards. Australia’s premier showbusiness awards are entering their 37th year, an incredible tradition in an industry which is yet to reach its 40th year in this country. We’ll probably never know whether those who instigated the awards, at what was then called TV-Radio Week, ever dreamed that, more than three decades on, they would not just still exist, but have thrived to become part of the Australian showbusiness scene. The word Logie — coined by Graham Kennedy after the first awards were presented on his show, In Melbourne Tonight — now is part of the Australian idiom. This year, the Seven Network will telecast the awards live from Melbourne in April. Some innovations made experimentally with the awards in 1994 will be retained in 1995; in other respects, they will return to what has become Logies tradition. The move from the traditional Friday to Sunday night will be discontinued. While the awards are no longer presented dinner-style, they are followed by a fairly large party. There were no reports of actors turning up early, knowing their lines and giving brilliant performances on a particular Monday morning last year!”

Tuesday: The Benson And Hedges World Series Cricket, Australia versus England, is live from Melbourne, with limited coverage in Melbourne (2.20pm to 4.30pm, Nine) and full coverage in Regional Victoria (2.20pm to 6pm, 7pm to 10pm, WIN). Jennifer Keyte’s World Around Us (7.30pm, Seven/Prime) continues Greg Grainger‘s travels through Italy. 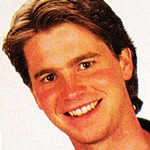 Thursday: The Benson And Hedges World Series Cricket, Australia A versus England, is live from Sydney (2.20pm to 6pm, 7pm to 10pm, Nine/WIN). The Best Of Beyond 2000 (7.30pm, Ten) looks at Australia’s first database of surfing breaks; the future of animation; and unlocking the secrets of whales.

Friday: In Neighbours (6.30pm, Ten), Bianca (Annie Gagliardi) and Marlene (Moya O’Sullivan) hatch a plan to turn the back of the shop into a drop-in centre.